We're rolling out a new, more modern comments experience in the current versions of PowerPoint including our mobile and web versions. This new experience improves collaboration by adding a number of new capabilities to the commenting experience.

You can type your new comment in the comments pane at the right and select Post (or press CTRL+Enter on Windows, or CMND+Enter on Mac) to finish your comment.

In PowerPoint for the web you'll find comments in the margin, to the right of your slides, by default. If you want to access all of the features of modern comments you can open the Comments Pane. To turn on the Comments pane, click the Comments button towards the top right corner of the PowerPoint window.

Text anchoring is a new way to anchor your comments to a specified range of text, instead of to an object. To add an anchored-text comment, select the text you want and click New Comment in the Review tab or click New in the Comments pane. The text is highlighted. The shade of the highlighting varies depending on whether the text is light or dark.

When you're working with text-anchored comments, you'll notice that the highlighting changes depending on whether the comment in the Comments pane is hovered over or selected. If neither, the highlighting is visible if the text box object is selected or if you've turned on Show Advanced Markup.

Once you've started your new comment you can call the attention of one or more of your colleagues by using the @mention feature. Simply type the @ symbol followed by their name or email alias.

By default, modern comments shows the comment marker only for the currently selected comment. However, you can set PowerPoint to show all comment markers on the slide at the same time. 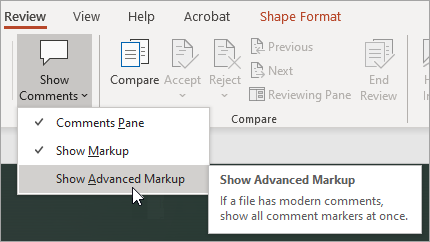 The setting lasts only for a single session. If you close and reopen the presentation, you'll need to change the setting again to have PowerPoint show all comment markers for a slide.

Turn modern comments creation on or off

As we roll out this feature, the ability to create modern comments is on by default for must users, but can be turned off, if desired. If you're a business or enterprise user, the setting for this is managed by your IT administrator. If your a consumer user, do the following:

Also, this setting is only available on PowerPoint for the desktop. If your installation of PowerPoint is managed by your company, these options will be disabled.

Why don't I see modern comments?

Current builds that use modern comments

Modern comments are now available for business, enterprise, and consumer users. You will only see modern comments if you are using these current versions of PowerPoint

If you can't see modern comments

Comments may not display in collaboration

If you don't see comments in a PowerPoint file, it may be that you are collaborating with someone who does not have the same desktop version of PowerPoint. PowerPoint files can only show either modern comments or classic comments, not both. The first comment made in the file determines which type of comments will display in that file.

What can you do if you can't see a collaborator's comments?

If you are unable to see a collaborator's comments because you are using different desktop versions of PowerPoint,