Microsoft Lens (formerly “Office Lens”) is a great way to capture information from documents, whiteboards, business cards, receipts, menus, signs, handwritten memos, or anything else containing text that you want to import but not manually type out yourself. With Microsoft Lens, you don’t need to jot down any notes by hand, rely on blurry cell phone images, or worry about misplacing anything.

Microsoft Lens is great for capturing sketches, drawings and equations too — even images without text. When capturing images, Microsoft Lens gets rid of shadows and odd angles, so your final captures are easier to see.

You can upload your captured document and whiteboard images to Microsoft OneNote, Word, PowerPoint, or OneDrive, and you can also save them as PDF files or send them in email.

If you haven’t already, download the latest version of Microsoft Lens for free from the App Store.

Step 1: Choose what to capture

As soon as you open Microsoft Lens, you can choose a capture mode.

Swipe left or right near the bottom of the screen to select either Whiteboard, Document, Business Card, or Photo. 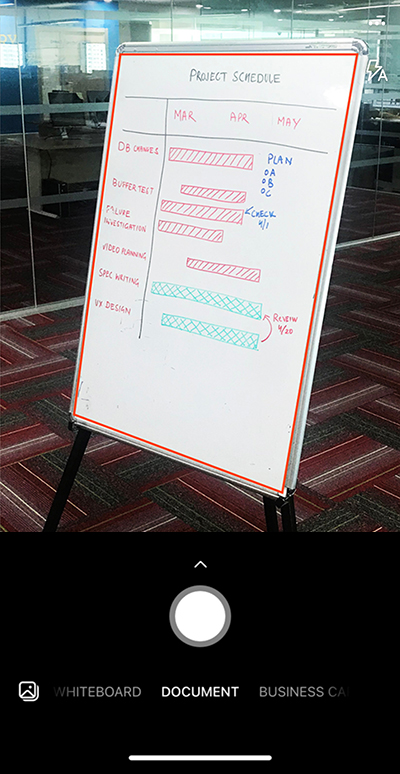 Whiteboard    This mode is best used for capturing handwritten notes and sketches on a dry erase board or a similar surface. Microsoft Lens will adjust your images so that the background isn’t too bright and the ink strokes are easier to see.

Document    This mode is optimized for small words that are written or typed on a page or on a note. It’s also great for things like forms, receipts, posters, fliers, or restaurant menus.

Business Card    This mode captures contact information from a business card and saves it to the Contacts app on your iPhone or iPad, as well as to Microsoft OneNote. This feature currently works best with business cards in English, German, Spanish, or Simplified Chinese.

Photo    This mode is best used for capturing photographs and images containing scenery or people.

After you’ve selected your capture mode in Step 1, you can either take a new picture with your camera, or import an existing image from your device.

Do either of the following:

Microsoft Lens lets you edit captured images before you save them, so they look exactly how you want. You have the option to adjust the borders of an image after you capture it, or to capture multiple images one after the other and edit them later. 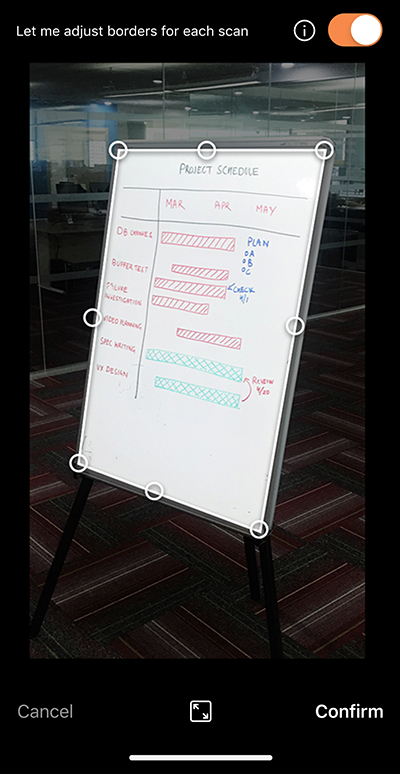 Tap any of the icons that appear in the lower tray to begin editing or adjusting a captured image.

You can Add a new image to your scan, apply a Filter to the image, Crop, Rotate, or Delete the image, or annotate it with the Pen or with Text.

Filters are used to quickly apply visual enhancements to selected image (for example, to remove all colors from a document).

By using the optional Crop feature, you can trim away any unwanted parts of the image by excluding them from your selection. When you have finished cropping the image, tap Confirm in the lower right corner. If you want, you can then continue editing the current image with any of the other editing tools. 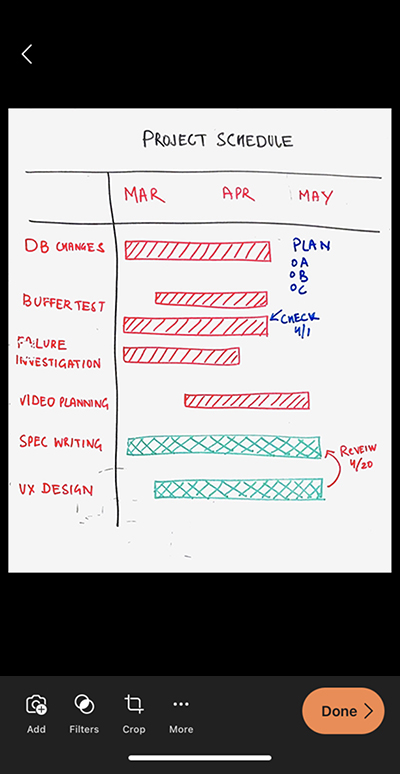 When you’re done editing your images, tap Done in the lower right corner.

If your image was captured in Whiteboard, Document, or Photo mode, you can save it to the Photo Library on your iPhone or iPad.

You can also save the image as a PDF (Portable Document Format) file, or save it to Microsoft OneNote, OneDrive, Word, or PowerPoint. In addition, you can also send the image via Microsoft Outlook or the Mail app in iOS and iPadOS. 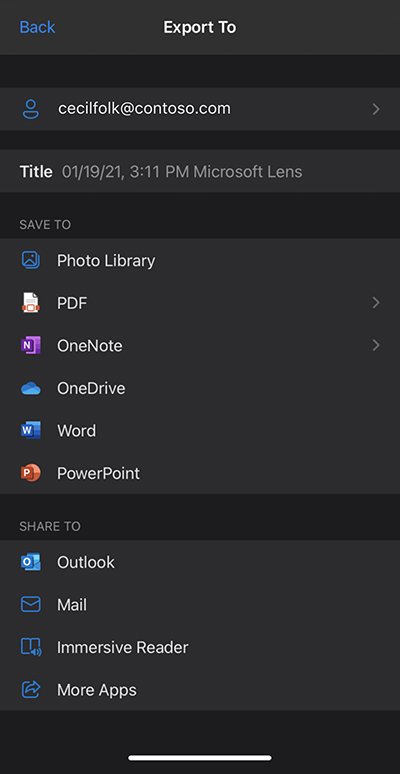 Note: If you choose to save the image to OneNote, OneDrive, Word, or PowerPoint, you may be prompted to sign in with your Microsoft Account or your Work or School account.

If you want Microsoft Lens to read aloud any text found in the captured image, tap Immersive Reader. For more information, see Accessibility in Microsoft Lens for iOS.

If you want Optical Character Recognition (OCR) to be applied to your captured image, select the Word option. Microsoft Lens will create a Word file in your OneDrive account, which will automatically extract all legible text that is found in your captured image.

If your image was captured in Business Card mode, tap OneNote to save it as a vCard (.vcf file). Alternately, if you want to save the image to the Photo Library on your iPhone or iPad, tap Photo Library and then tap Close.

Captured images saved as Word, PowerPoint, or PDF files will be in your Documents folder on OneDrive, so you can access them from any of your devices. PDF files can also be saved locally on your iPhone or iPad, and you can edit the save location for your PDF by tapping the Save button.

Microsoft Word can recognize handwritten or typed and printed text, as well as the general layout of what you capture. As a result, the text, formatting, and layout in the Word document that Microsoft Lens creates are fully editable — just as if you authored the document yourself.

Microsoft PowerPoint can recognize handwritten lines and strokes that are transformed into drawing objects that can be re-colored, resized, moved around, and edited. You can also remove the background of drawings, which makes it easier to reuse them in other presentations.

PDF (Portable Document Format) files extract the text information from a captured image. You can search the text contents of a PDF file and highlight or copy any part of the page with your preferred PDF Reader app.

Optical Character Recognition (OCR) is supported in the following languages:

To make it easier to work with Microsoft Lens, you can connect a keyboard to your device with either Bluetooth or USB.

In addition, the Accessibility settings in iOS and iPadOS can help you use Microsoft Lens in a way that works best for you. On your iPhone or iPad, go to Settings > Accessibility to turn on features like VoiceOver.