Replace a formula with its result

You can convert the contents of a cell that contains a formula so that the calculated value replaces the formula. If you want to freeze only part of a formula, you can replace only the part you don't want to recalculate. Replacing a formula with its result can be helpful if there are many or complex formulas in the workbook and you want to improve performance by creating static data.

You can convert formulas to their values on either a cell-by-cell basis or convert an entire range at once.

This article does not cover calculation options and methods. To find out how to turn on or off automatic recalculation for a worksheet, see Change formula recalculation, iteration, or precision.

Replace formulas with their calculated values

When you replace formulas with their values, Excel permanently removes the formulas. If you accidentally replace a formula with a value and want to restore the formula, click Undo

immediately after you enter or paste the value.

The following example shows a formula in cell D2 that multiplies cells A2, B2, and a discount derived from C2 to calculate an invoice amount for a sale. To copy the actual value instead of the formula from the cell to another worksheet or workbook, you can convert the formula in its cell to its value by doing the following: 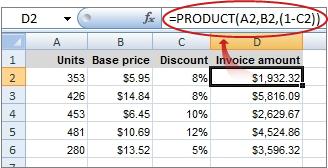 Tip: When you are editing a cell that contains a formula, you can press F9 to permanently replace the formula with its calculated value.

Replace part of a formula with its calculated value

When you replace a part of a formula with its value, that part of the formula cannot be restored.