This feature is only available for Teams on mobile devices at this time. We're working on a desktop version.

Some incoming messages in Teams only need a quick confirmation or a routine reply. Instead of typing a response to a message, just tap one of the suggested replies buttons above the box where you type. Tapping a suggested reply sends it immediately. 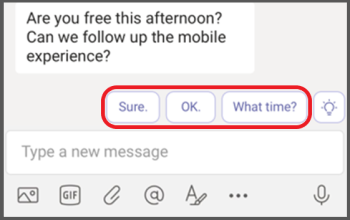 Note: Suggested replies may not be available on your device if it’s on a network and the administrator has turned off this feature.