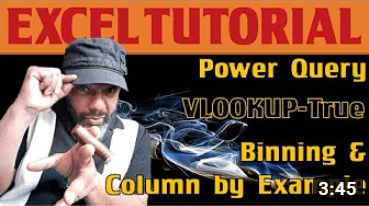 Power Query is fantastic, but there's an ongoing need to do the equivalent of an approximate match like we do when we use VLOOKUP-True to assign categories to values.

This video shows how to assign values by "binning" which is done by using Column by Example and getting help from Power Query. Power Query will build a formula based on how we train it. Once the formula is built, it'll probably be wrong. HOWEVER! It's so much easier to modify the formula than it would be to stack up conditions in a conditional column, or write a messy IF statement in Power Query's M-Code.