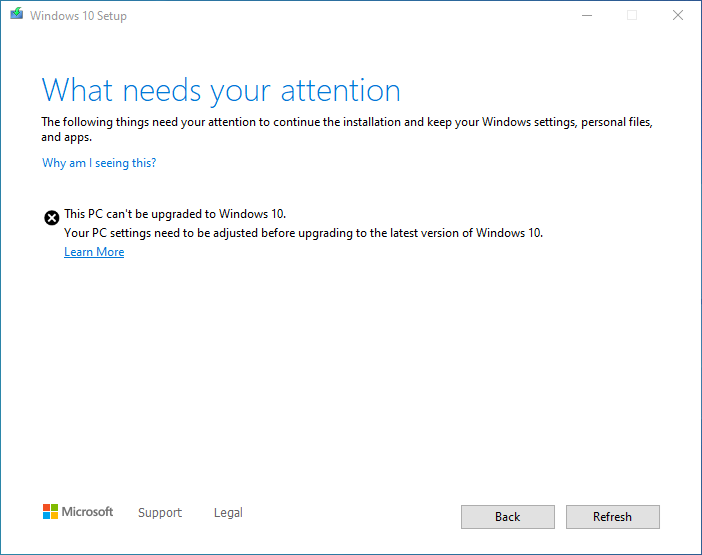 As of January 7, 2021, you should only receive the above safeguard hold dialog if you are using outdated feature update bundles or media.

After updating to Windows 10, version 20H2, you might receive the error in LSASS.exe with the text "Your PC will automatically restart in one minute" when interacting with any dialog window that lists users, for example accessing the sign-in options settings app page or the users folder in the Local user and groups MMC snap-in. This issue only affects devices in which any of the local built-in accounts have been renamed, such as Administrator or Guest. You might also receive an error in the Application Event log with Event ID 1015 that LSASS.EXE failed with status code C0000374. C0000374 is related to heap corruption.

As of January 7, 2020, this issue is now resolved and the safeguard hold has been removed when devices are using the latest feature update bundles and refreshed media. Please note, if there are no other safeguards that affect your device, it can take up to 48 hours before you will be able to the update to Windows 10, version 2004 or Windows 10, version 20H2.

Feature update bundles released December 3, 2020 or later will resolve this issue when deploying via Windows Server Update Services (WSUS) and Microsoft Endpoint Configuration Manager. Refreshed media was released December 3, 2020 on Visual Studio Subscriptions (VSS, formerly MSDN Subscriptions) and December 7, 2020 on Volume Licensing Service Center (VLSC). For information on verifying you're using the refreshed media, see How to address feature update refreshes in your environment. If you are using or creating custom media, you will need to include an update released November 17, 2020 or later.