This article describes an issue that occurs in the Turkish locale in Windows Server 2012 R2. A hotfix is available to fix this issue. The hotfix has a prerequisite.

When you're running Windows Azure Pack in Windows Server 2012 R2, you may encounter an issue in which tenants can't see their Virtual Machines or Networks in the Tenant Portal. In this case, both two elements show a red exclamation mark. 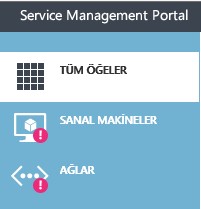 Additionally, in the Admin Portal, the VM CLOUDS element may show that no clouds are configured.

It occurs because of one of the following issues. Each issue can be confirmed by checking the ManagementOdataService event log:

If IIS application pools host the Virtual Machine Manager (VMM) and Admin providers have been recycled, the schema load fails on the OData request. When this issue occurs, you'll see an event that looks something like this in the ManagementOdataService event log:

The Service Provider Foundation (SPF) component fails very frequently because of a duplicate item in UserDataCache, and you receive an error message that looks something like this:


An item with the same key has already been added.


When this issue occurs, the ManagementOdataService event log may show an event that looks something like this:

A supported hotfix is available from Microsoft. However, this hotfix is intended to correct only the problem that's described in this article. Apply this hotfix only to systems that are experiencing this specific problem.

If the hotfix is available for download, there's a "Hotfix Download Available" section at the top of this Knowledge Base article. If this section doesn't appear, submit a request to Microsoft Customer Service and Support to get the hotfix.

Note If additional issues occur or if any troubleshooting is required, you might have to create a separate service request. The usual support costs will apply to additional support questions and issues that don't qualify for this specific hotfix. For a complete list of Microsoft Customer Service and Support telephone numbers or to create a separate service request, visit the following Microsoft website:

http://support.microsoft.com/contactus/?ws=supportNote The "Hotfix Download Available" form displays the languages for which the hotfix is available. If you don't see your language, it's because a hotfix isn't available for that language.

To apply this hotfix, you don't have to make any changes to the registry.

You may have to restart the computer after you apply this hotfix.