Skip to main content
Dynamics 365 for Finance and Operations More...Less

The documentation about setting up and usage Dynamics 365 for Finance and Operations for MTD for VAT is published on https://docs.microsoft.com/en-us/dynamics365/unified-operations/financials/localizations/emea-gbr-mtd-vat-integration .

To prevent fraud, APIs of the HMRC provide HTTP headers that must be used to pass audit data.

Depending on the architecture of the environment used by a company which interoperates with the MTD for VAT different set of HTTP headers for fraud prevention must be transmitted. “Gov-Client-Connection-Method” header must represent the connection method used for the request by the company. It is supposed that most companies using Dynamics 365 for Finance and Operations in cloud architecture use “WEB_APP_VIA_SERVER” connection method during interoperation with HMRC via Electronic messages functionality. It is also possible that a user may initiate a batch job for interoperation with HMRC, in this case connection method will be transmitted as “BATCH_PROCESS_DIRECT”.

To support possibility of detecting parameters required by fraud prevention requirements of the HMRC like time-zone and MAC address in BATCH_PROCESS_DIRECT connection method and version of the software in both WEB_APP_VIA_SERVER and BATCH_PROCESS_DIRECT connection methods, an X++ methods were included into the application part. Here is the information about versions of Dynamics 365 for Finance and Operations including these methods: 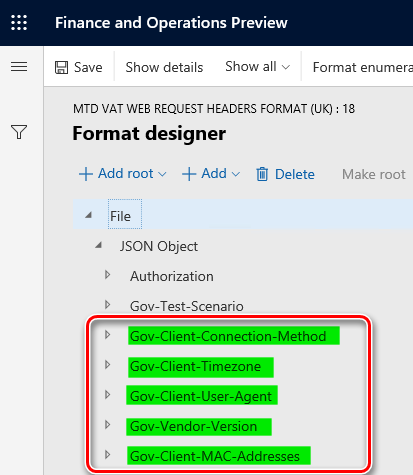 Determination of the corresponding values of the headers is supported via calling of the X++ methods by the “MTD VAT model mapping” configuration. “Electronic Messages framework model” was also extended to include nodes used for mapping of the values of fraud prevention headers.

When mentioned or higher versions of the ER configurations are imported, fraud prevention parameters will be transmitted as part of the HTTP request the HMRC.

When user initiates a request to the HMRC without activating a batch job, the following dialog will inform about what information is going to be sent to the HMRC: 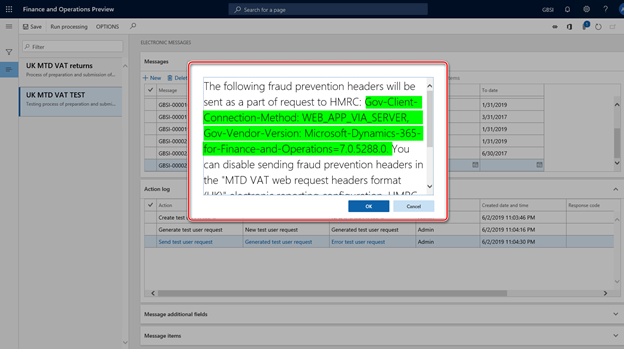 When user initiates a request to the HMRC in a batch job, the fraud prevention headers will be transmitted to the HMRC and information about what headers were sent will be attached to the batch job. Open System administration > Inquires > Batch jobs, select your batch job and review Message details of the Log (Action pane > Batch job > Log).

If for some reason a company decides to address requests to the HMRC without transmitting fraud prevention headers, the version of the format including the fraud prevention headers can be deleted or not imported at all or alternatively these headers can be disabled in the “MTD VAT web request headers format (UK)” in Electronic Reporting module. For this purpose, the following steps must be done: 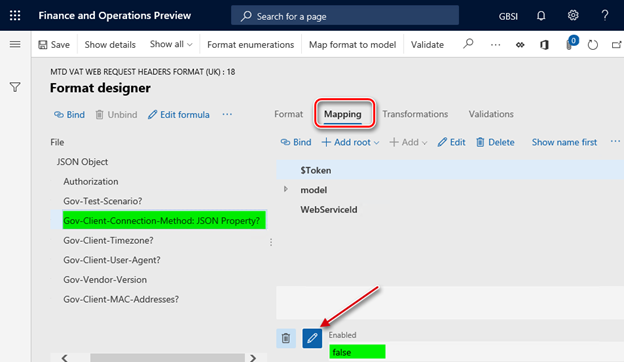 5. Save your configuration and Complete it.

6. Open Tax > Setup > Electronic reporting > Web service settings and select your child format in the “Request headers format mapping” field of all the web services used for interoperation with the HMRC instead of the parent format used by default: