Microsoft Forms allows your users to quickly and easily create custom quizzes, surveys, questionnaires, registrations and more. When you create a quiz or form, you can invite others to respond to it using any web browser, even on mobile devices. As results are submitted, you can use built-in analytics to evaluate responses. Form data, such as quiz results, can be easily exported to Excel for additional analysis or grading. 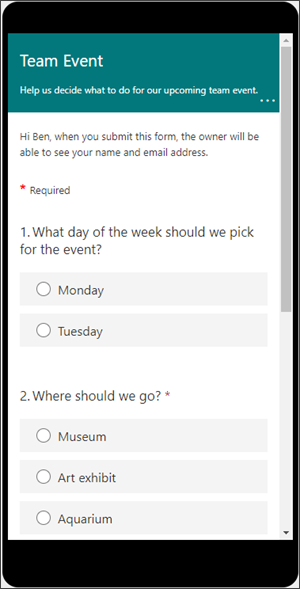 Microsoft 365 administrators can control how Microsoft Forms is used in their organization through the following tasks:

If your business has legal, regulatory, and technical standards to meet for content security and data use, this section is for you.

Where is data stored for Microsoft Forms?

Microsoft Forms has met GDPR compliance requirements as of May 2018. Please refer to Microsoft 365 Data Subject Requests for the GDPR for more information.

Are FERPA and BAA protections in place?

Is there a limit to the number of users and amount of data stored for user accounts even after they have left my organization?

Currently, there is no limit for the number of users for which data is retained, as long as the provisioning of their accounts is within your organization's online service agreement. There is also no limit for the amount of data stored for user accounts.

The original owner of a form is no longer with my organization and/or their Microsoft Forms license has been removed. What happens to the data that is associated with the form they created?

All account-related data will be deleted 30 days after a user account has been deleted from your tenant (Azure AD).

What can I use Microsoft Forms for?

Microsoft Forms is a simple, lightweight app that lets you easily create surveys, quizzes, and polls. In educational institutions, it can be used to create quizzes, collect feedback from teachers and parents, or plan class and staff activities. In business organizations, it can be used to collect customer feedback, measure employee satisfaction, improve your product or business, or organize company events.

Who can use Microsoft Forms?

Microsoft Forms is free to use for anyone with a Microsoft account (Hotmail, Live, or Outlook.com). The following Office 365 Education and Microsoft 365 Apps for business customers can also use Microsoft Forms:

Log in to forms.office.com and start creating surveys, quizzes, and polls.

Can people without a Microsoft 365 account still submit a survey or quiz on Microsoft Forms?

Microsoft Forms authors can toggle their settings to allow users outside of their organization to respond to their survey or quiz. In this case, users will be submitting responses anonymously. If you want to see who has filled out your survey or quiz, you can require respondents to fill in their names as part of your questionnaire.

If you require more responses, we recommend exporting existing responses to an Excel workbook, and then clearing these from your survey or quiz. This will enable you to collect more responses once cleared.

Which web browsers does Microsoft Forms work with?

In what languages is Microsoft Forms available?

No. Microsoft InfoPath was a solution to create customizable forms that can enable automated workflows, whereas Microsoft Forms is a basic, lightweight app for quickly collecting information via surveys and quizzes.

Where can I go to submit feedback such as product bugs or feature requests?

We want to hear from you! To send feedback about Microsoft Forms, go to the upper right corner of your form and select More form settings

Turn off or turn on Microsoft Forms

Adjust your form or quiz settings in Microsoft Forms