Narrator is a screen reader that reads the elements on your screen aloud. To start Narrator, on Start , swipe over to the All apps list, then select Settings > Ease of Access > Narrator , and then use the toggle to turn on Narrator. 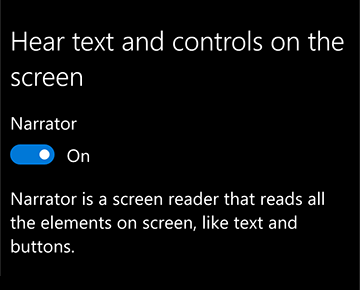 To stop Narrator, swipe left or right until you select the Start button. Then, press and hold the Volume Up button and double-tap anywhere on the screen. If Narrator quick launch is turned on, this action can also turn Narrator on again.

Once Narrator is turned on, use these Narrator-specific gestures with your device.