Note For customers who are using earlier versions of the MARS Agent, this is a mandatory update because of the important functional and stability fixes that are listed in this article.

By default in this update, users who have servers that are registered to Recovery Services Vaults or Backup Vaults in the regions that are mentioned in the "Availability (Public Preview)" section will be able to see the option to back up the System State, as shown in the following screen shot: 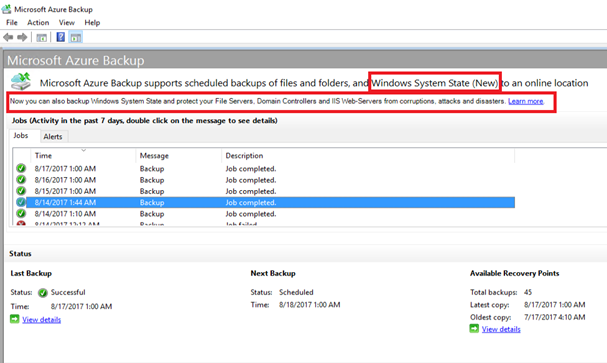 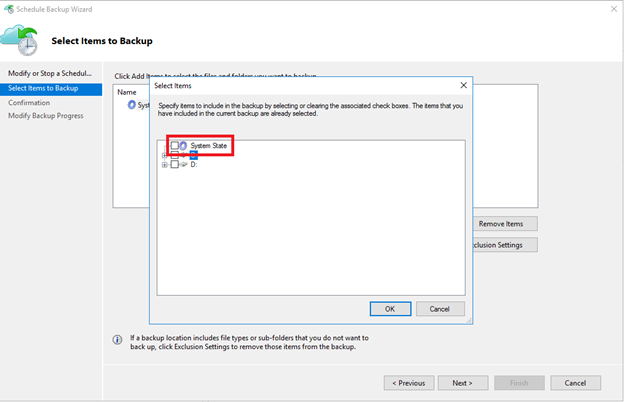 For more information about how to back up and recover System State information, see the following Azure articles:

Back up Windows system state in Resource Manager deployment

By default, users who update their servers to this version of the MARS Agent, and have their servers registered to Recovery Services Vaults in one or more of the following regions, will be able to see the option to back up the System State:

Note This list is scheduled to be updated weekly to reflect regional availability.

Issues that are fixed in this update

After you apply this update, the following issues are fixed:

When you try to register a server that is running this update of the MARS Agent to a Recovery Services Vault on which it was previously registered, the MARS Agent does not get registered, and you receive the following error message:

The current operation failed due to an internal service error "Authorization Failed". Please retry the operation after some time.

To successfully register a server to the desired Recovery Services Vault, follow these steps:

To apply this update, install the latest version of the Microsoft Azure Recovery Services agent.

Note The version of this update for the Microsoft Azure Recovery Services agent is 2.0.9083.0.

For more information about how to download Microsoft support files, see the following Microsoft Knowledge Base article:

119591 How to obtain Microsoft support files from online services

Microsoft scanned this file for viruses. Microsoft used the most current virus-detection software that was available on the date that the file was posted. The file is stored on security-enhanced servers that help prevent any unauthorized changes to the file.

Applying this update to multiple servers

If your servers are registered to one or more Recovery Services Vaults, you can update your servers directly from Azure Portal. To update multiple servers from the Azure portal, follow these steps: