Important: In Excel for Microsoft 365 and Excel 2021, Power View is removed on October 12, 2021. As an alternative, you can use the interactive visual experience provided by Power BI Desktop, which you can download for free. You can also easily Import Excel workbooks into Power BI Desktop.

The amount of data is constantly growing, and so is the expectation to be able to visualize it. With additional data comes different perspectives, and opportunities to review and consider how data interacts in many different ways. Power Pivot and Power View bring your data together – as well as external data – and visualize it in fun, interesting ways.

In this section, you extend the Data Model to include images of flags for the regions or countries that participate in the Olympics, and then add images to represent the contested disciplines in the Olympic Games.

Images enrich the visual impact of the Power View reports. In the following steps you add two image categories – an image for each discipline, and an image of the flag that represents each region or country.

You have two tables which are good candidates for incorporating this information: the Discipline table for the discipline images, and the Hosts table for flags. To make this interesting, you use images found on the Internet, and use a link to each image so it can render for anyone viewing a report, regardless of where they are.

Power View reports are more interesting when images are associated with Olympic events. In this section, you add images to the Disciplines table.

Note: A workbook with all the manual input completed, called DiscImage_table.xlsx, is one of the files you downloaded in the first tutorial in this series. To make it easy, you can download it by clicking here. Read the next steps, which you can apply to similar situations with your own data.

In order for reports in Power View to correctly display the images, you must correctly set the Data Category to Image URL. Power Pivot attempts to determine the type of data you have in your Data Model, in which case it adds the term (Suggested) after the auto-selected Category, but it’s good to be sure. Let’s confirm.

Your Data Model now includes URLs for pictograms that can be associated with each discipline, and the Data Category is correctly set to Image URL.

Use Internet data to complete the Data Model

Many sites on the Internet offer data that can be used in reports, if you find the data reliable and useful. In this section, you add population data to your Data Model.

In order to create reports that include population information, you need to find and then include population data in the Data Model. A great source of such information is the Worldbank.org data bank. After visiting the site, you find the following page that enables you to select and download all sorts of country or region data.

There are many options for downloading data from Worldbank.org, and all sorts of interesting reports you could create as a result. For now, you’re interested in population for countries or regions in your data model. In the following steps you download a table of population data, and add it to your Data Model.

Note: Websites sometimes change, so the layout at Worldbank.org might be a little different than described below. Alternatively, you can download an Excel workbook named Population.xlsx that already contains the Worldbank.org data, created using the following steps, by clicking here.

Now you’re ready to import that data into your Data Model.

That wasn’t too hard. Your Data Model now includes links to flags, links to discipline images (we called them pictograms earlier), and new tables that provide population information. We have all sorts of data available, and we’re almost ready to create some compelling visualizations to include in reports.

But first, let’s make report creation a little easier, by hiding some tables and fields our reports won’t use.

You may have noticed how many fields are in the Medals table. A whole lot of them, including many you won’t use to create a report. In this section, you learn how to hide some of those fields, so you can streamline the report creation process in Power View.

To see this yourself, select the Power View sheet in Excel. The following screen shows the list of tables in Power View Fields. That is a long list of tables to choose from, and in many tables, there are fields your reports will never use. 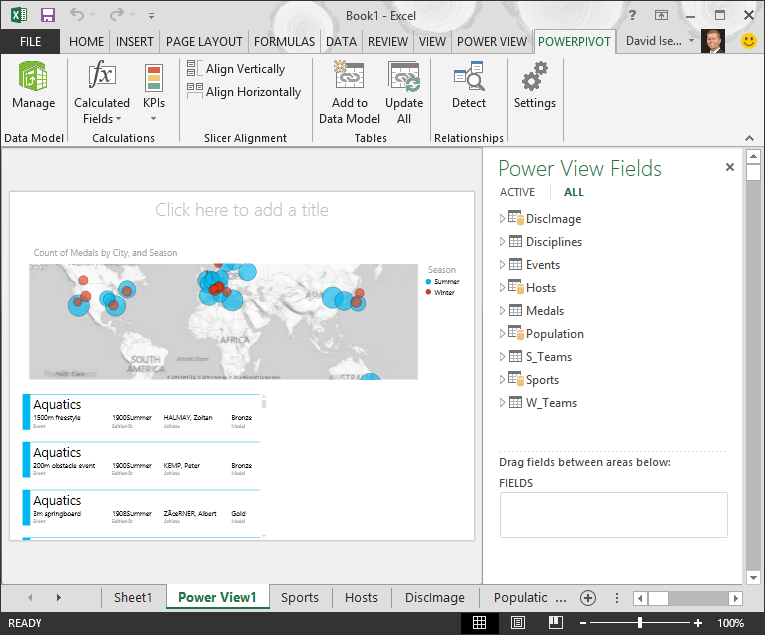 In the following steps, you hide a few of the tables and fields using Power Pivot. If you need tables or fields you’ve hidden to generate reports, you can always go back to Power Pivot and unhide them.

Note: When you hide a column or field, you won’t be able to create reports or filters based on those hidden tables or fields.

There are also some fields that aren’t useful for creating reports. The underlying data may be important, but by hiding fields from client tools, such as PivotTables and Power View, the navigation and selection of fields to include in reports becomes clearer.

The following steps hide a collection of fields, from various tables, that you won’t need in your reports.

Now when we look at the Power View sheet and Power View Fields, we see the following screen. This is more manageable. 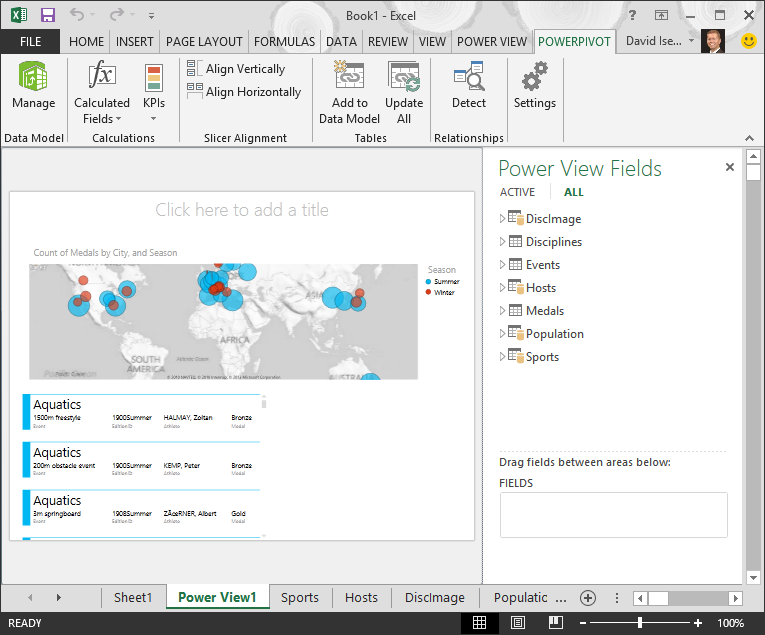 Hiding tables and columns from client tools helps the report creation process go more smoothly. You can hide as few or as many tables or columns as necessary, and you can always unhide them later, if necessary.

With the Data Model complete, you can experiment with the data. In the next tutorial, you create all sorts of interesting and compelling visualizations using the Olympics data and the Data Model you’ve created.

In this tutorial you learned how to import Internet-based data to your Data Model. There’s a lot of data available on the Internet, and knowing how to find it and include it in your reports is a great tool to have in your reporting knowledge set.

Question 1: Which of the following methods is a valid way of including Internet data in your Data Model?

A: Copy and paste the information as raw text into Excel, and it is automatically included.

B: Copy and paste the information into Excel, format it as a table, then select Power Pivot > Tables > Add to Data Model.

C: Create a DAX formula in Power Pivot that populates a new column with URLs that point to Internet data resources.

Question 2: Which of the following is true of formatting data as a table in Excel?

A: You can assign a name to a table, which makes it easy to identify.

B: You can add a table to the Data Model.

C: You can establish relationships between tables, and thereby explore and analyze the data in in PivotTables, Power Pivot, and Power View.

D: All of the above.

Question 3: Which of the following is true of hidden tables in Power Pivot?

A: Hiding a table in Power Pivot erases the data from the Data Model.

B: Hiding a table in Power Pivot prevents the table from being seen in client tools, and thus prevents you from creating reports that use that table’s fields for filtering.

C: Hiding a table in Power Pivot has no effect on client tools.

D: You cannot hide tables in Power Pivot, you can only hide fields.

Question 4: True or False: Once you hide a field in Power Pivot, you cannot see it or access it any longer, even from Power Pivot itself.