This issue occurs after you apply the December 2014 cumulative update for Microsoft Lync Server 2013 web components server. When Google Chrome is your default browser, and you try to connect to a Lync meeting by using Lync Web App, one of the following user interfaces appears on your Windows-based or Mac-based computer. 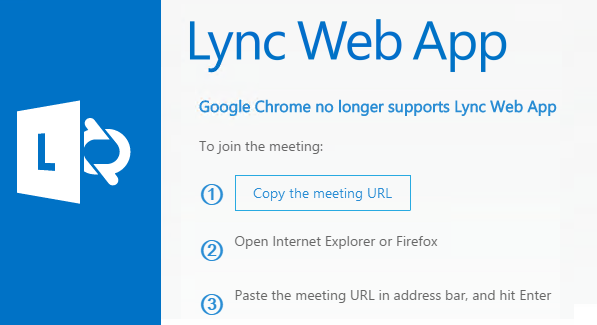 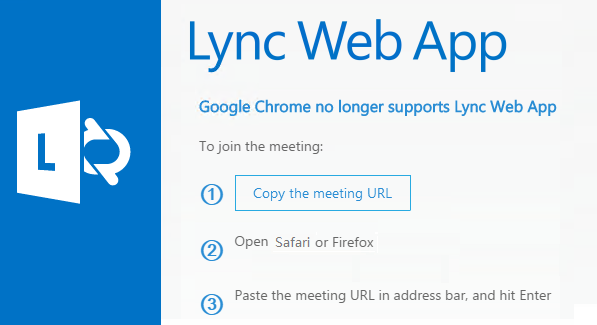 If you click the Copy the meeting URL button, a "?sl=" string is appended to the end of the copied URL. When you paste the meeting URL into an alternative browser, Lync Web App always starts although you have a native Lync client installed.

On December 31, 2014, Microsoft released an update for Lync Server 2013 (Cumulative Update 5.0.8308.866) to remove the manual workaround instructions for 32-bit versions of Chrome. The instructions were included in the previous December 2014 update (Cumulative Update 5.0.8308.857). This latest update enables Lync Web App to run in a 32-bit version of Chrome as usual.

To avoid the manual workaround, administrators must apply the latest December 31, 2014 update. Microsoft has also begun to apply this update to Lync Online.

Google changes on the Chrome browser affect the usage of Lync Web App in both Mac and Windows. This requires us to change Lync Server and Lync Online in order to deliver a seamless experience for Chrome users. Microsoft is already working on changes to improve the Lync Web App user experience and is expected to release another update in the first quarter of 2015. In the meantime, users will be provided with manual workaround instructions as part of the meeting join experience.

Microsoft plans to remove this manual workaround, add support for 64-bit versions of Chrome in Mac, and continue to improve the Lync Web App experience for all Chrome users in early 2015. We are also working on making it possible for Chrome users to enjoy a full Lync meeting experience even after the planned deprecation of the so-called "Netscape Plug-In API," or NPAPI, that is going to be targeted by Google in April, 2015.