In a dedicated or International Traffic in Arms Regulations (ITAR) Microsoft Office 365 environment, a user is prompted by a Security Alert dialog box that includes the following error message:

The name on the security certificate is invalid or does not match the name of the site.

For example, the Security Alert dialog box resembles the following: 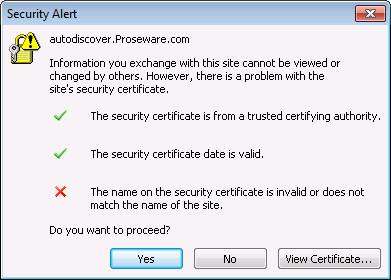 This issue may occur under the following circumstances:

Generally, this issue occurs when the URL that you are trying to access is not listed in either the Subject or the Subject Alternative Name (SAN) of the Secure Sockets Layer (SSL) certificate for the website. Although different organizations' configurations may differ slightly, this issue typically occurs because the organization's Autodiscover Domain Name System (DNS) records are configured incorrectly.


To resolve this issue, you may have to change your Autodiscover DNS records (internal, external, or both). However, these changes should not be taken lightly, because the Autodiscover feature may not function if DNS records are configured incorrectly.


The following table displays the fundamental order of operations for how the Outlook client locates the Autodiscover service:

In summary, the Autodiscover service may be resolved by using an A record, a CNAME record, or an SRV record. To determine which records are used currently, run the following commands at a command prompt or in Windows PowerShell:

autodiscover.proseware.com However, as we mentioned in the "Cause" section, this URL is not listed in the SAN of the SSL certificate that is used by the Autodiscover service. For example, see the following screen shot: 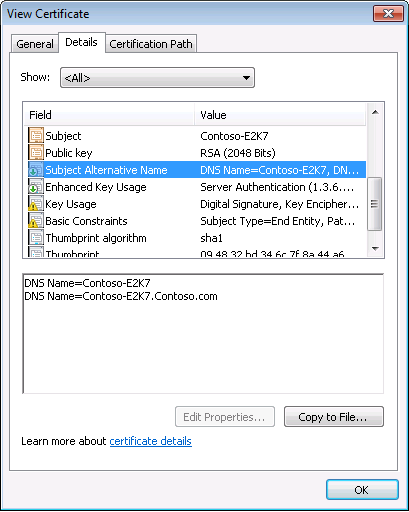 To resolve this issue, use the following method.

This is the preferred resolution method in the current service design because the existing SSL certificate does not have to be updated and deployed. According to the fundamental order of the operations that are listed earlier in this section, the organization may implement the new record by using a controlled and tested way to prevent outages of the Autodiscover service.

For more information about the Autodiscover service, go to the following Microsoft TechNet website: