Yes, your documents are safe. Delve never changes any permissions. Only you can see your private documents in Delve.

Also, other people can't see your private activities, such as what documents you've read, what emails you've sent and received, or what Teams conversations you've been in. Other people can see that you've modified a document, but only if they have access to the same document.

Note that documents are not stored in Delve. If you want to change permissions on any of your documents, you can do this from where the documents are stored, such as OneDrive for work or school or SharePoint in Microsoft 365.

Who can see my documents?

You can see who has access to a specific document from within Delve, and you can also share the document with others.

You can also stop sharing a document to prevent people from seeing it.

Who can see attachments?

When you or others share a document as an attachment in email, only people in the email conversation will see that document in Delve.

Attachments are marked with a paper clip on the content card.

Who can see the documents on a board?

Boards are open to everyone in your organization. You and others can see, add documents to, remove documents from, or follow any board in Delve.

To make Delve a great experience for everyone in your network, it's important that you and your colleagues store and share your documents where Delve can get to them: in OneDrive for work or school or SharePoint in Microsoft 365.

Learn more: Store your documents where Delve can get to them

Can I delete a document from Delve?

Documents are not stored in Delve, so you can't delete documents from Delve directly. The documents are stored other places in Microsoft 365, for example in OneDrive for work or school or in SharePoint. Only people who already have access to a document, can see it in Delve.

To delete a document, or prevent it from showing up in Delve, use the link in the lower left of the content card to go to the location where the document is stored. 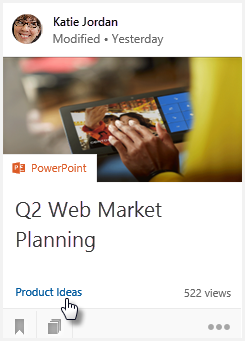 How can I keep a document private?

If you want to keep a document private, store it in OneDrive for work or school and choose not to share it. These documents will not show up in Delve for other users. Your private documents are marked with a padlock and the text Private document.

Documents that aren't shared, are marked with a padlock and the text Only you in the Sharing column in OneDrive for work or school.

If you want, you can always share the document with others later.

My private document has 7 views in Delve – does that mean that 7 people viewed it?

No. If your document is stored in OneDrive for work or school and you haven’t shared it with other people, or if it's stored in another private location, only you can see the document in Delve. 7 views for a private document means that you opened it 7 times.

Can other people see what documents I’ve viewed?

No, no-one can see which documents you’ve opened and viewed in Delve.

If you’ve made changes to a document, other people can see that you modified the document, but only if they have access to the same document.

Can I turn off Delve?

Note:  Delve never changes any permissions. You and your colleagues only see documents that you already have access to. Only you can see your private documents in Delve.

To turn off documents in Delve

What happens if others have Delve and I don’t?

If your organization uses Delve, but you don't have a user license that includes Delve, you will not see Delve in the Microsoft 365 app launcher.

If you want to prevent your documents from showing up on your profile page in Delve for other Delve users, you can choose to turn off showing documents in Delve. If you don't have Delve, you can do this from your Profile page in Microsoft 365:

Store your documents where Delve can get to them