You can create a simple formula to add, subtract, multiply or divide values in your worksheet. Simple formulas always start with an equal sign (=), followed by constants that are numeric values and calculation operators such as plus (+), minus (-), asterisk(*), or forward slash (/) signs.

Let's take an example of a simple formula.

Let's take another variation of a simple formula. Type =5+2*3 in another cell and press Enter or Return. Excel multiplies the last two numbers and adds the first number to the result.

You can use AutoSum to quickly sum a column or row or numbers. Select a cell next to the numbers you want to sum, click AutoSum on the Home tab, press Enter (Windows) or Return (Mac), and that's it!

When you click AutoSum, Excel automatically enters a formula (that uses the SUM function) to sum the numbers.

Note: You can also type ALT+= (Windows) or ALT+

+= (Mac) into a cell, and Excel automatically inserts the SUM function.

Here’s an example. To add the January numbers in this Entertainment budget, select cell B7, the cell immediately below the column of numbers. Then click AutoSum. A formula appears in cell B7, and Excel highlights the cells you’re totaling. 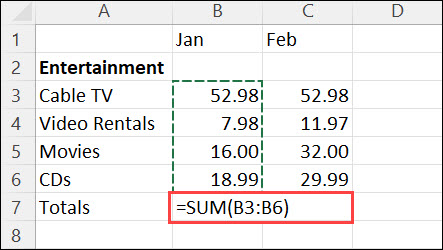 Press Enter to display the result (95.94) in cell B7. You can also see the formula in the formula bar at the top of the Excel window. 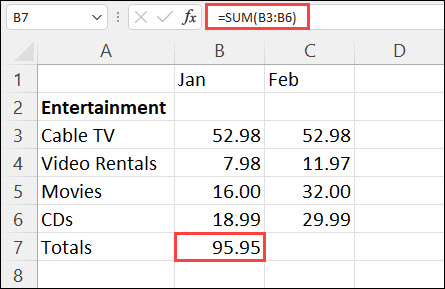 Copy the example data in the following table, and paste it in cell A1 of a new Excel worksheet. If you need to, you can adjust the column widths to see all the data.

Note: For formulas to show results, select them, press F2, and then press Enter (Windows) or Return (Mac).