In Microsoft Access, macros that are attached to user interface (UI) objects such as command buttons, text boxes, forms, and reports are known as UI macros. This distinguishes them from data macros, which are attached to tables. You use (UI) macros to automate a series of actions, such as opening another object, applying a filter, starting an export operation, and many other tasks. This article introduces you to the newly-redesigned macro builder, and shows you the basic tasks involved in creating a UI macro.

Macros can be contained in macro objects (sometimes called standalone macros), or they can be embedded into the event properties of forms, reports, or controls. Embedded macros become part of the object or control in which they are embedded. Macro objects are visible in the Navigation Pane, under Macros; embedded macros are not.

Each macro is made up of one or more macro actions. Depending on the context you are working in, some macro actions may not be available for use.

Here are some of the main feature highlights of the Macro Builder.

Here's a video that walks you through the main areas of the Macro Builder.

This procedure creates a standalone macro object that will appear under Macros in the Navigation Pane. Standalone macros are useful when you want to reuse the macro in many places of the application. By calling the macro from other macros, you can avoid duplicating the same code in multiple places.

This procedure creates a macro that is embedded in an event property of an object. Such a macro does not appear in the Navigation Pane, but can be called from events such as On Load or On Click.

Because the macro becomes part of the form or report object, embedded macros are recommended for automating tasks that are specific to a particular form or report.

Add actions to a macro

Actions are the individual commands that make up a macro, and each is named according to what it does, for example, FindRecord or CloseDatabase.

Step 1: Browse or search for a macro action

The first step in adding an action is finding it in the Add New Action drop-down list or in the Action Catalog.

To find an action, use one of the following methods:

Step 2: Add an action to a macro

Once you have found the macro action you want, add it to the macro by using one of these methods:

Most macro actions require at least one argument. You can view a description of each argument by selecting the action and then moving the pointer over the arguments. For many arguments, you can select a value from a drop-down list. If the argument requires you to type in an expression, IntelliSense helps you enter the expression by suggesting possible values as you type, as shown in the following illustration:

When you see a value that you want to use, add it to your expression by double-clicking it or using the arrow keys to highlight it and then pressing the TAB or ENTER key.

For more information about creating expressions, see the article Introduction to expressions.

About using IntelliSense with properties in web databases

When you are creating an embedded UI macro on a web-compatible form, IntelliSense allows you to add any form property to an expression. However, in a web database, only a subset of form properties can be accessed by using UI macros. For example, given a control named Control1 on a form named Form1, IntelliSense will let you add [Forms]![Form1]![Control1].[ControlSource] to an expression in a UI macro. However, if you then publish the database to Access Services, the macro containing that expression will generate an error when it is run on the server.

The following table shows the properties that you can use in UI macros in web databases:

Actions are executed in order, from the top to the bottom of the macro. To move an action up or down in the macro, use one of the following methods:

To delete a macro action:

Control program flow with If, Else If, and Else

To execute macro actions only when certain conditions are true, you use an If block. This replaces the Condition column that was used in earlier versions of Access. You can extend an If block with Else If and Else blocks, similar to other sequential programming languages like VBA.

The following illustration shows a simple If block, including Else If and Else blocks: 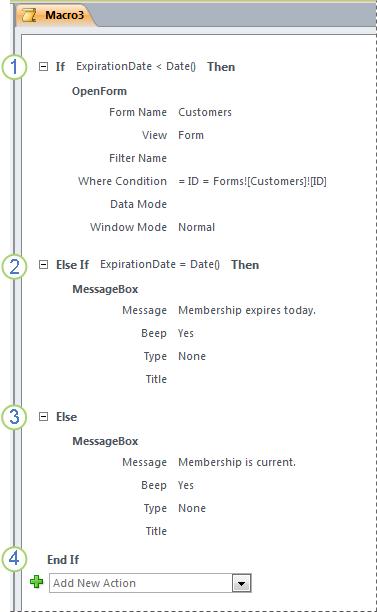 The If block executes if the ExpirationDate field is less than the current date.

The Else If block executes if the ExpirationDate field is equal to the current date.

The Else block executes if none of the previous blocks do.

The If block ends here.

Add an If block to a macro

Add Else or Else If blocks to an If block

Each macro can contain multiple submacros. A submacro is designed be called by name from the RunMacro or OnError macro actions.

You can improve the readability of a macro by grouping actions together and assigning a meaningful name to the group. For example, you could group actions that open and filter a form into a group named “Open and filter form.” This makes it easier to see which actions are related to each other. A Group block does not affect how the actions are executed, and the group cannot be called or run individually. Its primary use is for labeling a group of actions to help you understand the macro as you read it. In addition, while editing a large macro, you can collapse each group block down to a single line, reducing the amount of scrolling you have to do.

If the actions you want to group are already in the macro, use this procedure to add them to a Group block:

If the actions are not already present:

Group blocks can contain other Group blocks, and can be nested up to a maximum of 9 levels deep.

When you create a new macro, the macro builder displays macro actions with all arguments visible. Depending on the size of the macro, you might want to collapse some or all of the macro actions (and blocks of actions) while you are editing the macro. This makes it easier to get an overall view of the structure of your macro. You can expand some or all of the actions as needed to edit them.

Expand or collapse a single macro action or block

Expand or collapse all macro actions (but not blocks)

Expand or collapse all macro actions and blocks

Tip:  You can “peek” inside a collapsed action by moving the pointer over the action. Access displays the action arguments in a tooltip.

If you need to repeat actions that you have already added to a macro, you can copy and paste the existing actions much as you would do with paragraphs of text in a word processor. When you paste actions, they are inserted just below the currently selected action. If a block is selected, the actions are pasted inside the block.

Tip:  To quickly duplicate selected actions, hold down the CTRL key and drag the action(s) to the location in the macro where you want them to be copied.

When you copy macro actions to the clipboard, they can be pasted as Extensible Markup Language (XML) into any application that accepts text. This enables you to send a macro to a colleague via an e-mail message, or post the macro on a discussion forum, blog, or other Web site. The recipient can then copy the XML and paste it into their Access 2010 Macro Builder. The macro is recreated just as you wrote it.

You can run a macro by using any of the following methods:

If you are having problems getting a macro to run, there are a couple of tools you can use to get to the source of the problem.

Add error-handling actions to a macro

We recommend adding error handling actions to each macro as you write it, and leaving them in the macro permanently. When you use this method, Access displays descriptions of errors as they occur. The error descriptions help you understand the error so that you can correct the problem more quickly.

Use the following procedure to add an error-handling submacro to a macro:

The following illustration shows a macro with the OnError action and a Submacro that is named ErrorHandler. 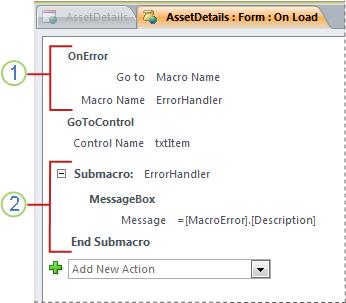 The OnError macro action is placed at the top of the macro, and calls the ErrorHandler submacro in the event of an error.

The ErrorHandler submacro only runs if it is called by the OnError action, and displays a message box that describes the error.

Use the Single Step command

Single Step is a macro debugging mode that you can use to execute a macro one action at a time. After each action is performed, a dialog box appears that displays information about the action, and any error codes that occurred as a result. However, because there is no description of the error in the Macro Single Step dialog box, we recommend using the error-handling submacro method described in the previous section.

Next time you run the macro, the Macro Single Step dialog box appears. The dialog box displays the following information about each action:

As you step through the actions, click one of the three buttons in the dialog box:

Convert a macro to VBA code

Macros provide a subset of the commands that are available in the Visual Basic for Applications (VBA) programming language. If you decide you need more functionality than macros can provide, you can easily convert a standalone macro object to VBA code, and then make use of the expanded feature set that VBA provides. Keep in mind, however, that VBA code will not run in a browser; any VBA code that you add to a Web database will only run when the database is open in Access.

To convert a macro to VBA code:

Access confirms that the macro was converted, and opens the Visual Basic Editor. Double-click the Converted Macro in the Project pane to view and edit the module.