Every SharePoint list contains a set of list forms that you use to view, edit, or add items to a list. Each list form displays the columns from that list as fields on a page where users can view, add, or edit information.

InfoPath 2010 is a powerful form creation and information gathering program included in the Microsoft Office 2010 release. Using InfoPath 2010, you can create highly customized, sophisticated forms without writing any code. You can drag and drop fields onto the form, add instant form validation using a set of rules, and apply different themes or branding to the form. 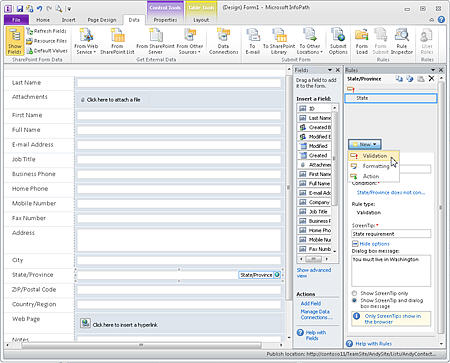 In InfoPath 2010, however, it is much easier to do these tasks using a rich set of templates, layouts, themes, and powerful rules management features. You also only need to edit one file, the InfoPath Form Template, or XSN, and this gets applied to all three of your list forms. (In SharePoint Designer 2010, if you want the same changes applied to all three list forms, you would have to customize the view, edit, and new form independently.)

When you open a list in Microsoft SharePoint Designer 2010 and look at the available forms for that list, you see three forms: DispForm.aspx, EditForm.aspx, and NewForm.aspx

To customize these forms in Microsoft SharePoint Designer 2010, you open them individually and make changes to them or create new forms to replace them.

Alternatively, you can choose an option in Microsoft SharePoint Designer 2010 to customize these forms in InfoPath 2010. When you do this, you create and publish an InfoPath Form Template, or XSN file, which is used with a new set of list forms: displayifs.aspx, editifs.aspx, and newifs.aspx. The template and the new forms replace the default ASPX forms that you started with.

The next time you open your site in Microsoft SharePoint Designer 2010, you’ll notice the addition of the new forms on the summary page for the list.

Before you choose to customize a list form in InfoPath 2010, it can be helpful to know how different the form will look when you customize it in InfoPath.

The default edit form (EditForm.aspx) appears as follows in the browser. 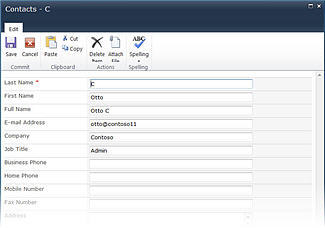 When you customize the form in InfoPath 2010, the new edit form (editifs.aspx with associated InfoPath template) appears as follows in the browser. 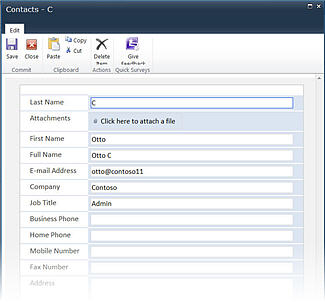 The new form uses a different color scheme and fonts and presents the Attachments field inline instead of in the head of the form. Again, this is just the default settings used in the new form. When you’re finished customizing the form, you can completely change the appearance and behavior of the form.

To further customize your list forms, repeat the steps above.

In addition to customizing your list forms using InfoPath 2010 from within to Microsoft SharePoint Designer 2010, you can use one of the following methods to customize these list forms.

To customize your list form in the browser, just browse to your form and then on the List tab, in the Customize List group, choose Customize Form as shown here. 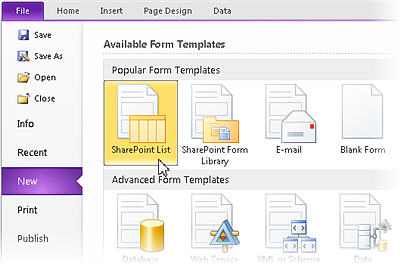 As you spend time customizing your SharePoint list forms in InfoPath 2010, you may choose to upsize all of your forms to InfoPath 2010 or just those that require a high level of customization for your users or your business solution site.

In addition to list forms, you can use Microsoft InfoPath 2010 to create powerful workflow initiation forms, forms for form libraries, browser-based forms, offline forms with SharePoint Workspaces, and much more.

Learn more about the different uses of InfoPath 2010 in the See Also section.