Microsoft Lists was designed to be used as a web site. The one limitation of that situation is that you haven't been able to view or edit a list while disconnected from the internet.

Now, on Windows (Windows 10 and later) devices running the OneDrive sync app, lists are available for viewing and editing when you're offline, too. With List sync, we synchronize the list data from the cloud to your Windows device, making fast list operations possible and allowing you to continue your work even when you're offline, you lose your internet connection, or you run into a service disruption in the app.

List sync lets you work seamlessly with a very large list; it will respond promptly when you sort, filter, or group your data, or when you change the view.

List sync doesn't change how you work with the Lists web app. It's still available for you to work on in a browser as before.

When you edit a list, the changes you make are synced back to the cloud—either right away (if you're online) or later (if you're offline at the time you make the changes).

Synced list data on your device is only available to you. If someone else were to sign in on your device, the synced data on the device wouldn't be available to them. We adhere to privacy guidelines outlined in the Microsoft Privacy Statement.

With Lists sync, it's possible for a conflict to occur if two people change the same item at the same time in different ways. The Lists app tries to automatically resolve the conflict, but if it can't do that, it notifies you about the conflict so that you can resolve it in an appropriate way.

To resolve a conflict

A red dot appears on the Switch view options menu to indicate a conflict exists:

When you're working offline, you can still open and work with your lists that have been synced to your device. Features that aren't available while you're offline are grayed out to indicate that you can't us them at the moment, as illustrated by the options circled in this picture: 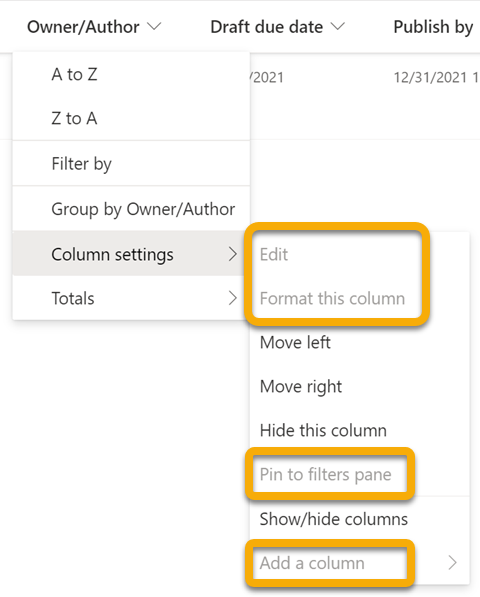 Similarly, on the start page for the Lists app, if a specific list isn't synced to your device, you won't be able to open that list in the standalone app while you're working offline, as illustrated by the dimmed list in the middle below:

When compared to OneDrive file sync, bandwidth consumed by List sync is minimal, and largely depends on the size of the list and how frequently the list is modified. Initial sync of the list results in syncing the entire list, but subsequent updates to the list result only in changes being synced.