The Functions Translator is available for free from the Microsoft Store, and can be installed by following these steps:

When the Functions Translator has been installed, it creates two buttons on the Home tab at the very right. 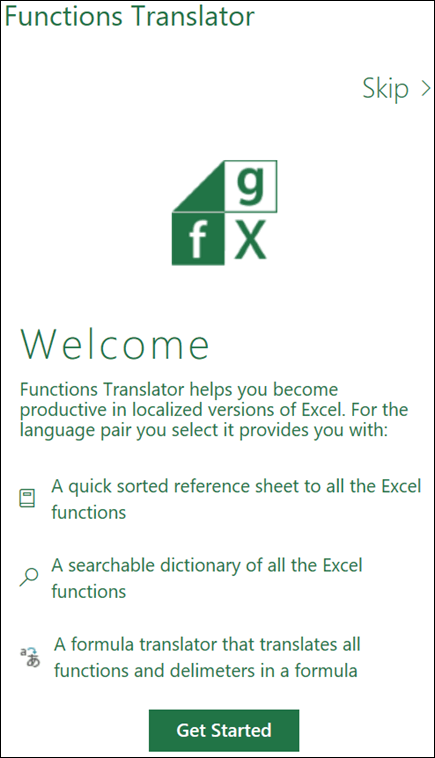 The pane opens at the right-hand side of Excel, which is where it will be anchored for all operations.

You can skip straight to translations by clicking the Skip > link on the right-hand side at the top of the frame, but we recommend selecting Get Started, which will bring you to the Language settings dialog. This allows you to choose your default From and To languages, although you can change them at any time. 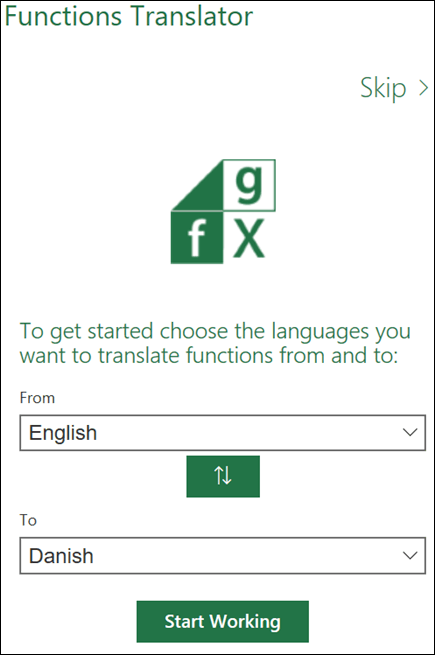 Here you can configure your language set. While the Functions Translator supports all languages that Microsoft has localized Excel functions to, you can only operate with one pair at the time. Any combination of languages is possible, and Excel will remember your choice. The language pair can be changed at any time through the Preferences pane, which is accessible from any of the add-in's main panes.

The green Up arrow/Down arrow button in between To/From has been supplied to let you easily switch the From and To languages around.

You can activate the Preferences pane by clicking the settings wheel at the bottom of any of the three main panes.

Besides providing various links that may be of interest, you can also change your To and From languages from here at any time. Clicking the Left arrow at the top of the pane brings you back to the main pane.

The Reference Pane has a drop-down list for Function category, which will display all functions in each group selected with the From language on the left, and the To language on the right. If you're not sure which category a function belongs to, you can choose the All option.

By default, the functions are sorted alphabetically by the From column, in this case English, and shown here with a small down arrow next to the word English. You can sort alphabetically, reverse alphabetically, and you can chose to sort on either the From or To language. Just click on the language you want to sort by, and click on the name again to reverse sort. The arrow indicates the sort direction.

Clicking on a function name in either column will bring you to the Dictionary pane, which will show the function with a short description.

The Dictionary pane enables you to search for any part of a function name by displaying all functions that contain the letters you entered. For performance reasons, search won't populate any results until you have entered at least two letters. Search will be in the language pair you have selected, and returns results for both languages. 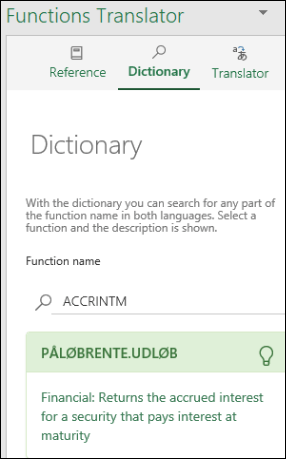 Clicking the lightbulb icon in the Dictionary pane will bring you to the Feedback on translation pane, where you can give us feedback about a particular translation. 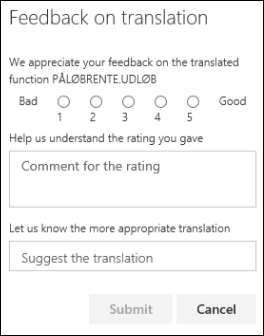 The top box is for the From language, and the bottom for the To language. The two green arrow buttons in the middle will translate in the direction indicated. In this case, we pasted a formula into the From box, and clicked the down arrow to translate to French.

Excel functions rely on delimiters to separate ranges and arguments from each other. Different languages use different separators, so while the Functions Translator will try to make the right choices, it may sometimes be necessary to set some of these manually.

Below each From/To box there are a group of buttons, shown above. The first button will take whatever is in the text box above, and paste it to the currently active cell in Excel. You can use that to paste a localized formula into the cell of your choice.

The other buttons are grouped by their respective functions: the decimal separator, the array separator and the list separator.

We hope that the Functions Translator helps you to become more productive using localized versions of Excel, and we very much welcome feedback. Please feel free to give feedback on both on functions where the translation may not be the best, but also with the add-in itself.

If you have an opinion on how we localize functions in general, and how you would like to see this add-in work, we would very much like to hear that opinion as well!

Note: We will review each piece of feedback personally, however, we cannot guarantee a response. Please do not include any files containing personal information.