Lists only support major versions. Each version of a list item is numbered with a whole number. If your organization requires approval of items in a list, the items remain in Pending status until they are approved by someone who has permissions to approve them. While in Pending status they are numbered with decimal numbers and are referred to as drafts.

If you're using an online app or the latest desktop version and you attempt to save another minor version beyond the maximum amount, you will overwrite the most recent minor version. If you're using an old client, you will not be able to save or upload any changes at all. To avoid overwriting or to continue to upload changes, you must publish the next major version. Then you will be able to publish up to the maximum number of minor versions again for that major version. To learn how to publish new versions, check out Publish or unpublish a version of a file.

Note: By overwriting or not saving minor versions, there is effectively no versioning on your file. Since updated applications will overwrite the most recent version and old clients won't save anything at all, once you've hit the minor versions limit your document history is no longer tracked. 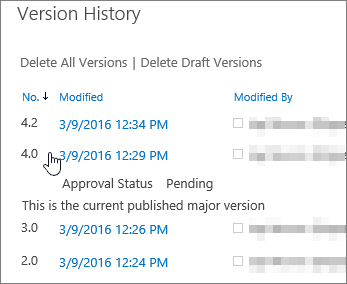