Launch your apps directly in your browser

The Microsoft 365 app launcher is a menu of apps and services that you are licensed for, and opens when you select the app launcher icon

on Office.com. The App launcher makes opening and switching between your apps easy by highlighting your recently used apps, and providing quick access to your recent online Office documents.

This gives you an idea of what it looks like: 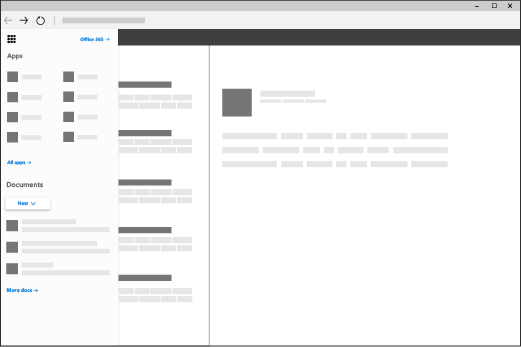 How do I use the app launcher?

From the Microsoft 365 app launcher, select a tile to go to that app or service. For example, you might choose Outlook to go to your email, or OneDrive to go to your OneDrive for work or school library.

You can also quickly open any Office documents you've been working on recently, or create a new one by clicking the New button and selecting an Office app. These documents are automatically stored in OneDrive.

When you view the app launcher for the first time, you'll see the core Office apps, as well as apps that your organization has added for you on top. You can simply unpin any of these apps if you don't use them. Just select the ellipsis on the right side of the app name (…) and then select Unpin. As you start using your apps, your most recently used apps automatically get pinned to your App launcher.

To see an alphabetical list of all the apps available to you, select All apps.