The MUNIT function returns the unit matrix for the specified dimension.

The MUNIT function syntax has the following arguments.

dimension    Required. Dimension is an integer specifying the dimension of the unit matrix that you want to return. It returns an array. The dimension has to be greater than zero.

The following example shows the results of the MUNIT function in a 3X3 matrix below, in cells A1:C3. 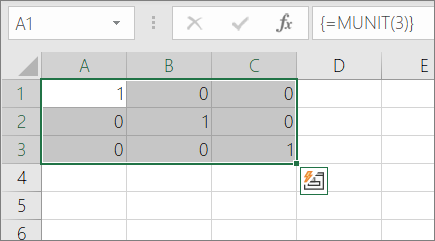 MUNIT can be used in line with other matrix functions, such as MMULT.