When OneDrive can't sync a file or folder because its name contains invalid characters, OneDrive can sometimes rename it for you.

To let OneDrive rename files or folders for you

Just select the Rename button in the notification that you receive. 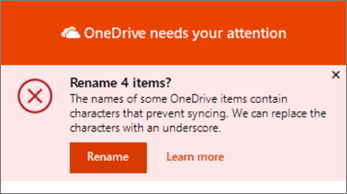 During automatic renaming, OneDrive replaces each invalid character with an underscore. For example, a file named .file for syncing would be renamed to _file for syncing.

The option to automatically rename files and folders appears only for names with the following issues:

To rename files or folders manually

Tip: To find the file or folder which needs attention, open File Explorer or Finder and navigate to the folder and file marked with the 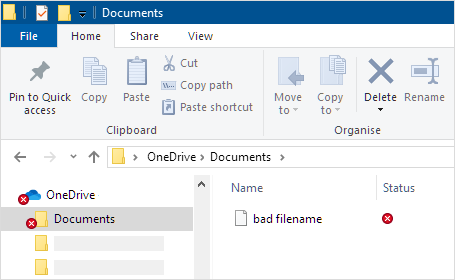 Invalid characters that OneDrive can't rename for you

Besides the invalid characters that OneDrive can correct for you, other characters and combinations of characters may also prevent files and folders from syncing. These other characters have special meanings when used in file names in OneDrive, SharePoint, Windows and macOS, such as "*" for wildcards, "\" in file name paths, and names containing .lock, CON, or _vti_.

The following characters aren't allowed in file and folder names in OneDrive, OneDrive for work or school on Microsoft 365, and SharePoint in Microsoft 365:

Invalid file names and file types in OneDrive, OneDrive for work or school, and SharePoint

Sort, rename, or move photos and files in OneDrive