In response to a growing trend in attacks that involve embedding malicious objects inside Office documents using the Object Packager control, Office made a change to the default activation model for Packager objects in Office applications.

Prior to this update, executables or scripts (e.g. EXE, JS, VBS) embedded using the Object Packager control can activate when a user double clicks on the embedded object within the document. For objects considered high risk by Windows, users will see a security warning as shown below. 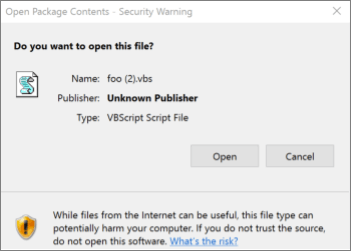 If the user clicks “Open”, the object executes with the privileges of the signed in user. Attackers abuse this vector to social engineer users to activate malicious programs embedded inside Office documents by persuading them to click through this warning prompt.

Office apps no longer allow the activation of objects that link to extensions that are considered high risk. When a user tries to activate such an object, they're shown the following notification:

Office has blocked access to the following embedded object to keep you safe.

Can I customize the extensions being blocked?

Yes, Office provides two Group Policy options that allow an administrator to customize which extensions are blocked. You'll find each of them under Office/Security Settings/.

Warning: Malicious scripts and executables can be embedded as an OLE package and can cause harm if clicked by the user. If extensions are added to this allow list, they can make Office less secure.

This policy setting allows you to specify additional file extensions that Office will block when they are embedded as an OLE package in an Office file by using the Object Packager control.

If you enable this policy setting, enter the additional file extensions to block, separated by semicolons.

How do I change this behavior?

To change this behavior for a specific application such as Word or Excel you can create the following registry key: HKEY_CURRENT_USER\Software\Microsoft\Office\16.0\<Office application>\Security\PackagerPrompt

To create the registry key:

Have a question about Office that we didn't answer?

Visit the Microsoft Answers Community to see questions and answers posted by others or get answers to your own questions.

Insert an object in Word or Outlook