Which app do I have?

Check the OneDrive icon on your taskbar. You might need to select the Show hidden icons arrow next to the notification area to see the OneDrive icon. The old OneDrive sync app (Groove.exe) has a blue cloud with white outlining as shown below.

If you see different icons as shown below, you have the new OneDrive app and don’t have to update the app.

You can also see which app you have in the search results. 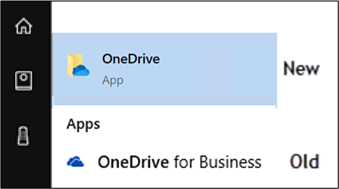 How do I upgrade the app?

Once the OneDrive sync app is set up, it will import your libraries from the old sync app.

If the old app is still running for libraries that are supposed to be imported after setting up the new app, follow these steps to trigger another import:

If you would like to clean up the old app, in cases where you see the old app running for unwanted libraries, open the Command Prompt using the steps above and type: