Use typographic styles to increase the impact of your publication

Microsoft Publisher 2010 delivers new tools that help you transform ordinary text into fine typography. Use the stylistic sets, stylistic alternates, true small caps, ligatures, number styles and more that are available in OpenType fonts such as Calibri and Gabriola. You can also use additional OpenType fonts that are available through other companies. Whether the font supports the advanced typographic features, as well as which features, is determined by the font designer. Most fonts at this time do not support advanced OpenType features.

When you create a text box the Text Box Tools tab appears on the ribbon. If the font you have selected supports OpenType, the Typography group will be enabled and give you access to formatting features and tools including new typography features.

If the font supports OpenType number styles this drop-down will be enabled.

Tabular formatting formats numbers so that each number uses the same number of pixels and will line up correctly in a table format.

Proportional formatting formats numbers so that the number of pixels is proportional, for example a 0 may be wider than a 1.

Lining and Old-style will either set the numbers to a baseline so that they are all at the same vertical position, or allow the numbers to have different positions as shown in this example:

Ligatures are connections between characters, such as between th or ff creating essentially one character out of two. Standard ligatures will only use the most common combination of letters. If the font designer also created an extended set of ligatures, these will be used if you select Standard and Discretionary or Historical and Standard.

Each font may have from one to twenty sets of typography styles for the selected font. 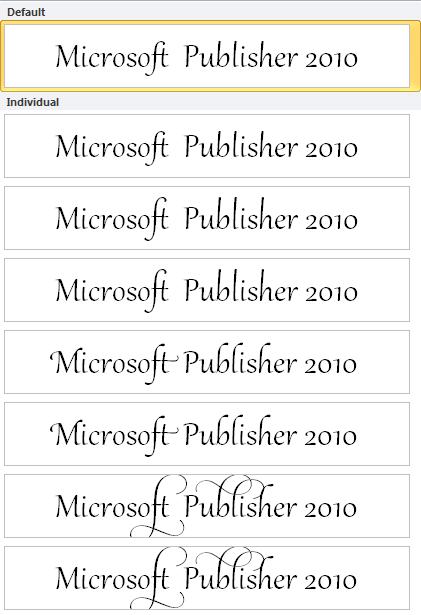 This button enables embellishments to the characters, if the font designer has created them, often in the form of bigger and more flamboyant serifs.

This allows you to select an alternate look for the look of the selected characters if the font designer has created these alternates.