This add-in for a OneNote Class Notebook, opened in OneNote 2013 or 2016, enables educators to save time and work more efficiently with their Class Notebooks.

For Help and Support, visit the Class Notebook add-in Support page or file a support ticket at https://aka.ms/EDUSupport.

With Class Notebook Add in you can easily:

This tab brings together useful resources, information, and tips. 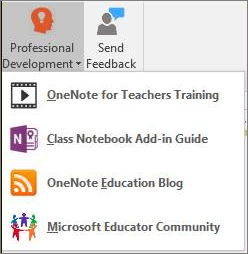 The Send Feedback tab allows you to send feedback directly to the development team. Select it and your default mail client will open, ready to send an email.

IT Administrators can deploy the Class Notebook Add-in broadly across a school or district. Instructions on how to do this can be found on the Download Center at https://www.microsoft.com/en-us/download/details.aspx?id=51934.

To deploy the Class Notebook Add-in with specific LMS or SIS information pre-configured for teachers, please visit the Group Policy page at https://aka.ms/classnotebookaddingrouppolicy.

We've worked hard to bring the best possible experience with this private alpha. However, if you encounter any issues, here are a few workarounds.