This article describes a hotfix that provides two additional Delivery Mode properties for Minimal Lower Layer Protocol (MLLP) send and receive ports when you use the BizTalk Accelerator for HL7 in a Microsoft BizTalk Server 2010 environment:

The upstream system sends only one message at a time and only after it receives an ACK/NAK. Additionally, the BizTalk polling interval is configured, and the Ordered Delivery parameter is set to True. This means that the number of messages that are processed per second is limited. This hotfix provides for additional configuration for one-way send and receive ports. It does not affect the ACK/NAK. However, it significantly increases the number of documents that are processed per second.

You should use performance counters to take a baseline before and after you apply this hotfix. When you benchmark, you should submit a reasonable number of messages over a reasonable period. For example, you could use the following:


One option to increase the number of documents that are processed per second is to lower the MaxReceiveInterval setting for the BizTalk host. Depending on the overall environment, on the tuning of the computer that is running Biz Talk Server 2010, and on the volume of documents that are processed, lowering the MaxReceiveInterval setting could have an adverse effect on the performance of the instance of SQL Server. For SQL Server tuning and for BizTalk tuning, refer to all available technical articles.

Note This hotfix also resolves an issue in Microsoft BizTalk 2010 Accelerator for HL7. For more information about this issue, click the following article number to view the article in the Microsoft Knowledge Base:

If the hotfix is available for download, there is a "Hotfix download available" section at the top of this Knowledge Base article. If this section does not appear, contact Microsoft Customer Service and Support to obtain the hotfix.

http://support.microsoft.com/contactus/?ws=supportNote The "Hotfix download available" form displays the languages for which the hotfix is available. If you do not see your language, it is because a hotfix is not available for that language.

You must have Microsoft BizTalk Accelerator for HL7 (BTAHL7) installed to apply this hotfix.

You may have to restart your computer after you apply this hotfix. If you are not prompted to restart, you must restart BizTalk services. For more information about this procedure, refer to the Readme.txt file that is included in this hotfix package.

This hotfix does not replace a previously released hotfix.

The English version of this hotfix has the file attributes (or later file attributes) that are listed in the following table. The dates and times for these files are listed in Coordinated Universal Time (UTC). When you view the file information, it is converted to local time. To find the difference between UTC and local time, use the Time Zone tab in the Date and Time item in Control Panel.

Message flow after the hotfix is installed and configured

After you apply and enable this hotfix, the MLLP adapter submits any message that is received by the MLLP adapter to MessageBoxDB. The End Point Manager (EPM) calls back the adapter together with the submission status in the BatchComplete method. This causes the adapter to send the commit ACK/NAK to the upstream system. In turn, the upstream system receives the ACK/NAK and then sends the next message. The BatchComplete method is independent of the MaxReceiveInterval setting and is called immediately after the message is submitted to BizTalk successfully.

Configure the receive and send ports as follows.

Note The receive and send port settings can be used independently or together. 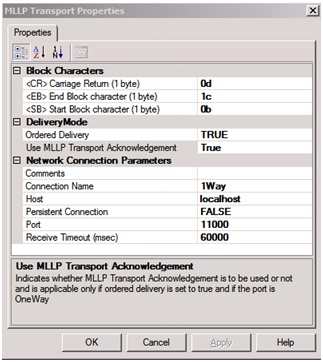 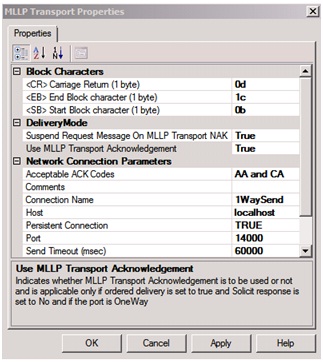 About the "Use MLLP Transport Acknowledgement" property

The following table describes the expected behavior of one-way or two-way ports that use the Use MLLP Transport Acknowledgement property. The required combination of settings must be applied as described in the "How to enable the hotfix" section.

The expected behavior in corner cases when the properties are used is as follows:


The expected behavior when the Suspend Request Message on MLLP Transport NAK property is set to True or to False is as follows:

Changes to the MLLP SDK Utility

The MLLP SDK Utility includes the following new parameters. All other parameters remain unchanged. For more information, refer to the product documentation.

For more information about how to manage performance settings in BizTalk server, visit the following Microsoft Developer Network (MSDN) website:

IBTBatchCallBack.BatchComplete methodFor more information about BizTalk Server hotfixes, click the following article number to view the article in the Microsoft Knowledge Base: