In this scenario, the outbound map is not applied to the HL7 ACK, and therefore the ACK is not transformed.

However, you cannot enter any additional acceptable ACK codes.

This issue was first fixed in the following cumulative update of BizTalk Server:


Make sure that you deploy the required Outbound Map DLL file and that you install this DLL file in the global assembly cache (GAC):

Note These properties are applied only if Direct Synchronous HL7 ACK is set to True.

If you don't need the HL7 Disassembler (DASM) in the HL7 Receive Pipeline to automatically generate HL7 acknowledgements (for example the ACK that's returned by some downstream system will be handed over to the upstream system), turn off the Route ACK to send pipeline on Request Receive port option for the source party, and set Use Direct Synchronous HL7 ACK to False. Then, use the outbound map option that's provided in the receive port.

This new feature applies to Receive Port/Location only. Currently, any BizTalk receive port has an Inbound Maps property. After this hotfix is installed, there is an additional property available in the receive location to apply a map to an HL7 ACK. This additional property lets you apply a map to a two-way receive location that has the Use Direct Synchronous HL7 ACK set to (=) True. The only purpose of this hotfix is to allow the user to specify a map for an ACK when Use Direct Synchronous HL7 ACK is set to (=) True.

After you install the hotfix, you will see two additional properties in the MLLP receive location configuration window. The default setting for the two properties is blank, and they must be populated and Use Direct Synchronous HL7 ACK must be set to (=) True.


One shortcoming of this new functionality: the HL7 ACK is not tracked. If you must track the ACK, you must also set the Inbound Maps property in the BizTalk receive port. Technically, you will be applying the map to the ACK that was put in the Message Box and the ACK that was returned to the upstream system. Both should be identical because both will have the same map applied. The following screen shot is included for clarification and is necessary only if the ACK must be tracked.

Note The Use Direct Synchronous HL7 ACK option improves inbound message processing performance. This is done by sending the ACK back to the upstream system as soon as the message is deposited to the message box. This setting improves the performance if the following conditions are true:

The new feature applies to send ports only. After you install the hotfix, the behavior will be based on the Acceptable ACK code that you select in the drop-down list instead of the code that's provided by the downstream system.

An additional Acceptable ACK codes value that's named "Custom" is added in the drop-down list in the Acceptable ACK Codes property. All previous combinations remain and are applied as they were before the new feature was added.

After CUSTOM is selected, you must also enter the new values in the Acceptable Custom ACK Codes property. These new ACK values must each be separated by a comma (,).

After you install the hotfix, the behavior will depend on the Acceptable ACK Codes setting that's selected. If the ACK code that's returned matches the selected acceptable code, processing occurs successfully. It will retry for standard ACK codes and suspend for any ACK code that's not listed (which will make it a nonstandard or a non-custom ACK code).

The following table represents this scenario. A written interpretation follows the table. 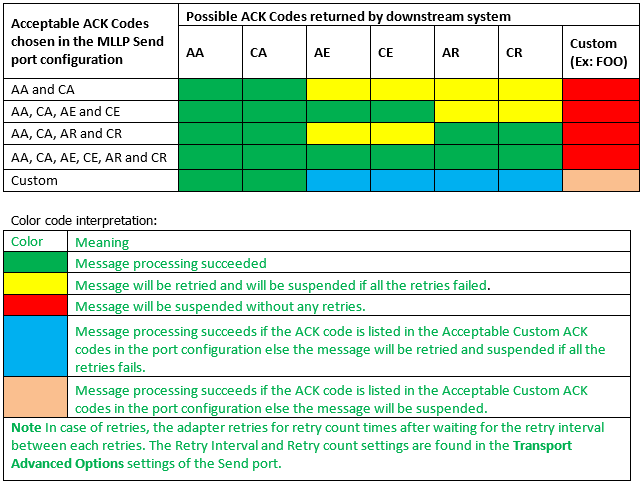 
When a standard ACK is not entered under Acceptable ACK Codes, an error that resembles the following is returned:

The adapter failed to transmit message going to send port "<SendPortName>" with URL "127.0.0.1:33000". It will be retransmitted after the retry interval specified for this Send Port. Details:"Message with MessageID: <MessageID>, received with acknowledgement type: Error and with ACK code: CE.


The out-of-the-box ACK schema must be modified by adding to the existing list of standard ACKs (AA,AE,AR,CA,CE,CR). Any additional acceptable custom ACKs (XX,ZZ, for example) must be added to the MSA.1_AcknowledgementCode field of the ACK schema. If the additional custom ACKs are not added to the schema, the pipeline validation fails with a “Table value not found” error. 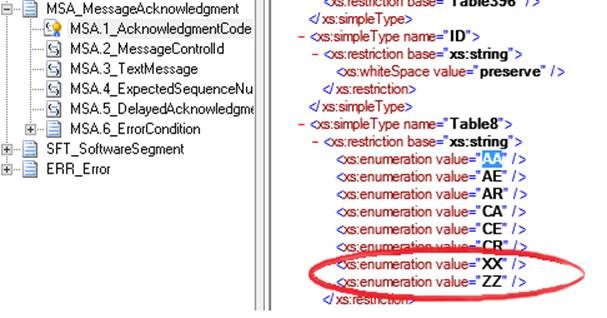 Prerequisites to install the software update

To apply this hotfix, you must have the following software installed:

You do not have to restart the computer after you apply this hotfix. However, we recommend that you close and reopen the BizTalk Admin Console after hotfix installation.

The English version of this hotfix has the file attributes (or later file attributes) that are listed in the following table. The dates and times for these files are listed in Coordinated Universal Time (UTC). When you view the file information, it is converted to local time. To find the difference between UTC and local time, use the Time Zone tab in the Date and Time item in Control Panel.