This article is intended only for technical support agents and IT professionals. If you're looking for help for a problem, please ask the Microsoft Community.

The purpose of this article is to provide guidance for how to reduce the User Datagram Protocol (UDP) amplification attack surface. This article includes the following information:

Users should follow the guidance in this article to close inbound UDP connections to reduce the attack surface.

User Datagram Protocol (UDP) is a connection-less protocol. When UDP is allowed inbound access to your Azure cloud services, it creates an attack surface that can be used for a distributed reflective denial-of-service (DRDoS) against virtual machines (VMs). The UDP-based amplification attack is a form of a distributed denial-of-service (DDoS) attack that relies on publicly accessible UDP services and bandwidth amplification factors (BAFs) to overwhelm a victim’s system with UDP traffic.

Note By default, if you have created an NSG, the configuration closes all ports, including UDP. Additionally, Azure has DDOS protection on the platform level. Therefore, users can also add DDOS on their service layer.

To learn more about this kind of attack, see https://www.us-cert.gov/ncas/alerts/TA14-017A. 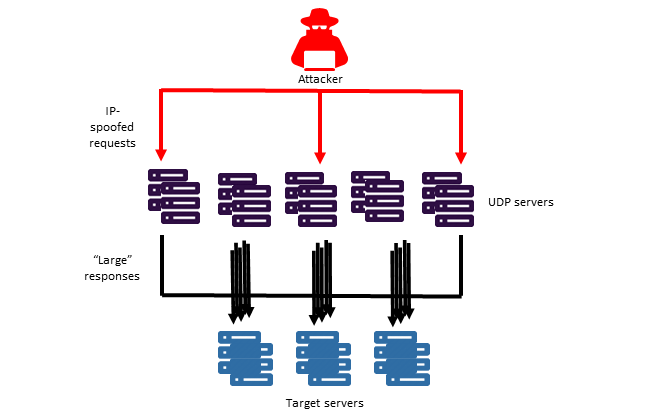 The following common ports are often used as part of these UDP reflection attacks: 17 (QOTD), 19 (CharGEN), 53 (DNS), 69 (TFTP), 123(NTP), 161 (SNMP), 389 (CLDAP), 1900 (SSDP), 9987 (DSM/SCM Target Interface), 11211 (Memcached). Users should assess whether they must publicly expose these ports to the internet, and then close all UDP ports that are not absolutely necessary. In particular, users who have to have inbound UDP for port 53 (DNS) or port 123 (NTP) should have the vulnerable configurations (as listed in this article) removed. This is because these two ports are used extensively for this type of attack.

The following steps help mitigate the effect of the attack on UDP:

The monlist service in NTP provides the ability to run queries for debugging information and should only be temporarily enabled for debugging a service issue. It can also be used to undertake UDP reflection attacks. In NTP Daemon (NTPD) packages older than 4.2.8, this service is enabled by default.  Users should follow this guidance:

Note 1: If you installed the NTPD package on Windows, and you have open ports, you will have to follow the steps for remediation action.

Note 3: Regular NTP packets that are used for time sync (mode 3 and mode 4) are not affected. This means that it is safe to sync time and for a server to serve only time.

Running a DNS recursive resolver open to the internet can cause a UDP attack against a user's own service and those of other users. Users should evaluate whether they actually must have a DNS service running. If they do not, they should either deny all access to Port 53 or uninstall the DNS service by following the instructions that are specific to their operating system and DNS implementation.

User who do require a DNS service to be running to provide authoritative name resolution but who do not require DNS recursion should disable this feature by following the instructions that are specific to their operating system and DNS implementation (as provided later in this article). Additionally, we strongly recommended in all cases that access to Port 53 in your NSG be restricted to the specific set of IP addresses that are required to operate your service by having the least privileges.

Users should close high-risk inbound UDP ports by following the guidance in this section. We recommended that users close inbound connections from the internet on all UDP ports.

Users who must open a specific UDP port to the internet should open that port only and reastrict inbound access to those IP ranges that are strictly necessary (that is, do not expose UDP ports to the entire internet).

To close the UDP ports, users can take either or both of the following actions:

Check for open UDP ports to the internet

Users should verify that services are configured to disallow the UDP inbound connections by reviewing their NSG rules, following the guidance that is found in How to Manage NSGs. Users can also run an external Nmap scan to verify that UDP ports are closed correctly.

Steps to complete an Nmap scan

Important: Users should scan only within their own IP address ranges to make sure that other users are not affected by following the Penetration Testing Rule of Engagement and also to make sure that the scan complies with the Microsoft Online Service Terms.

Note: If you plan to automate the scanning process by using the commands in these examples, be aware that UDP scans can take a long time to run because the scanner must sometimes wait to detect whether traffic is returned (this is not guaranteed). For best performance, create a scan for each port.

Run a Windows scan from the command line by having all ports closed.

Note Because this is an Nmap UDP scan, "open|filtered" can be interpreted as "closed."

Run a Linux scan for 1.1.1.1 by having DNS open. Notice that DNS port 53 does not say "open|filtered" because this would indicate that the port is closed. However, the other ports are shown as "open|filtered." This indicates that they are closed.

Additionally, run the following scripts to check whether the services on Ports 53, 123, and 389 are misconfigured.

For Linux users, each command must be proceeded by sudo.

Nmap script to identify the vulnerability:

This is not a recommended configuration. However, if the user has a dependent service, they should add additional security by using signing per the following guidance:

Users should use the following documents for how to configure Time Sync for their Azure VMs. If the user uses a vulnerable package for Linux or Windows NTPD, they should update to the current version.

Learn how to troubleshoot by using Azure Network Watcher: https://docs.microsoft.com/en-us/azure/network-watcher/network-watcher-connectivity-overview

No. These are the standard ports for the UDP services. However, either the services can be listening on another port number or the server can exist behind a load balancer that port forwards from another source port.