When you use the Ignore feature in Microsoft Outlook 2010 or later versions, messages are automatically moved to the Deleted Items folder.

When this problem occurs, a message trace indicates a DefaultFolderType:DeletedItems-Conversations Processing Agent event. Email messages that trigger this event are delivered directly to the Deleted Items folder.

This problem occurs if you select Ignore on an e-mail message, and then another message from that same thread is delivered into your mailbox.

Note This feature is not available or functional in the following configuration:

To resolve this problem, remove the Ignore status of the e-mail thread. To do this, follow these steps: 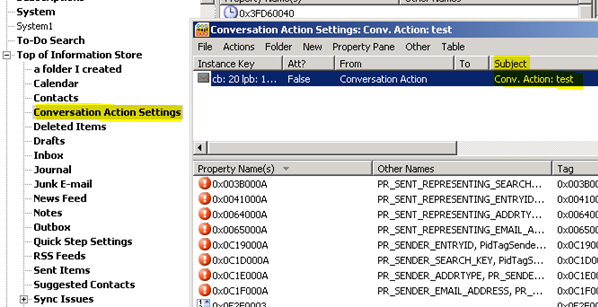 The associated messages in the Conversation Action Settings folder use the following rules:

You can also get different behavior from this feature, depending on the version of Exchange Server that you are using:

When you Ignore a conversation, you receive the following prompt to confirm the action.

In this dialog box, there is also a Don't show this message again option. If you enable this option, you will not be prompted to confirm the Ignore Conversation action the next time you select to ignore a message. If this option is enabled, the following data is written into the registry.

Note The Pont_String value may include numbers other than 63.