When a delegate deletes a meeting request for a meeting to which the delegate's manager was invited, the following warning may be displayed:

This warning is shown in the following figure. 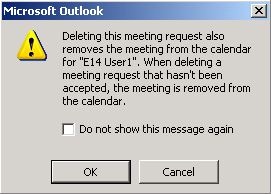 In this same scenario, if the delegate clicks OK in the warning dialog box, an entry is also logged in the Windows application event log of the delegate's client workstation. The event contains details similar to the following example:

For more information, see Help and Support Center at http://go.microsoft.com/fwlink/events.asp.

For more information about the Outlook 2010 hotfix package dated August 28, 2012, click the following article number to view the article in the Microsoft Knowledge Base:

Also in Outlook 2013, the tentative copy of the meeting remains in the Calendar when you delete the meeting invitation from the Inbox.

Note The PONT_STRING value may not begin with "79," as there may be other values contained in this string. The PONT_STRING registry value stores multiple comma-separated values. Each indicates a dialog box that you have chosen not to display.