A new Japanese era and its associated calendar begin on May 1, 2019.

Microsoft is preparing for these changes and plans to ship updates monthly as part of our regular update cadence.

These updates are intended to help customers and developers test and verify how the new Japanese era changes might impact their apps or Windows deployments.

Here’s the final list of Microsoft Knowledge Base articles, listed by the Windows version they include, for the new Japanese era updates.

You only need to install the most recent update. Each update includes all earlier updates. For the best update experience, we recommend that you have updates installed automatically on your device. Each automatic Windows update also includes the latest Japanese era updates.

This section is for customers who rely only on the Security-Only (SO) updates for Windows 8.1 and earlier versions of supported Windows. Customers must continue to install each SO update as they are made available to remain protected against known security vulnerabilities. The following update can be installed by our SO customers to get all the Japanese era related fixes.

To learn more about the SO updates for Windows 8.1 and earlier, see the More on Windows 7 and Windows 8.1 servicing changes published in October 2016.

Note: Unlike the general Windows updates, SO updates are not cumulative.

May 2019 Updates for Security-Only Customers

How to test the new Japanese era artifacts on Windows

Customers and partners can choose when to add the placeholder registry entry to their systems to make preparing easier for the new Japanese era change.

Note: Before you make any changes, we recommend that you back up your registry settings.

This test scenario is to verify that line of business (LOB) applications work when the new era transition is set to a future date.

Let’s say that the transition date is anticipated to be 1 May 2019, so the current era is 平成 (Heisei).

Set the following registry key under

This test scenario is to verify that LOB applications work when the current era is set to the new era.

Let’s say that the calendar transition has already occurred on 1 May 2018 and the current era is 令和(Reiwa)".

Set the following registry key under

Start with updating registry settings to enable different test scenarios for your LOB applications around new Japanese era change. After you back up your current registry settings, here's how to change the settings:

Next, here's how you test the Japanese Calendar:

In historical practice, for the first year of the era, a special character, “Gan (元),” whose Kanji character means “origin” or “beginning,” is used in place of the number “Ichi (1).” The first year “Gannen (元年)” continues until the end date of the Gregorian calendar year, December 31.

Windows now supports both “Gannen (元年)” and “Ichinen (1年)” for the first year of the era. For all the supported in-market versions of Windows from Windows 10 1809 and earlier, Gannen will be OFF by default, however, it can be enabled.

To disable Gannen, set the InitialEraYear registry key to “1年”.

VBA programming in Office that depends on OLE will support “Gannen (元年)".

Collation is the assembly of written information into a standard order based on numerical order, alphabetical order or both. Currently, supported Windows versions don't support collation.

The Kanji era full name can be normalized to the Kanji ligature era name and vice versa. For example, conversion from two characters representing 平成 (Heisei) era to a corresponding ligature㍻ (Heisei) and vice-versa. However, Microsoft won't release any updates to support normalization functionality for the new era.

The Kanji era full name and the Kanji ligature era name are treated as different strings during string comparison, even if you indicate a Japanese culture-specific comparison. By design, this difference will continue for the new Japanese era.

Certain OLE functions will be updated to handle the new Japanese era. If your applications are using Date and Time functionalities from Visual Basic 6.0, VBScript, VBA, JavaScript, or ATL/MFC libraries, you'll need to apply the latest update for Windows. In some cases, and you might also need to rebuild your applications in some cases because these libraries use OLE functions.

For customers who get updates from Windows Update, you only need to install the latest update to get all relevant fixes up to the current month. In contrast, customers relying only on the SO updates for Windows 8.1 and earlier will install all SO updates separately, in chronological order as described in Changes for Security-Only update customers.

You can go to the update history and look for the KB article numbers that were installed. If they belong to the latest updates table above, then the latest Japanese era fixes are installed on your device. Either check Windows Update or install the latest update listed in this KB for your operating system.

Steps to check for the KB article number: 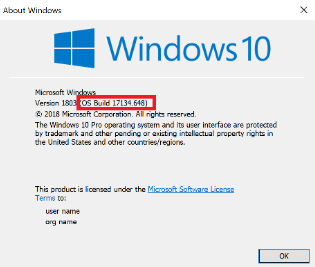 For Windows 8.1 and earlier: 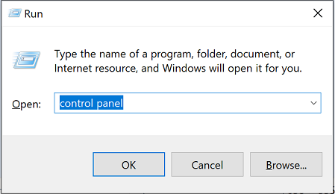 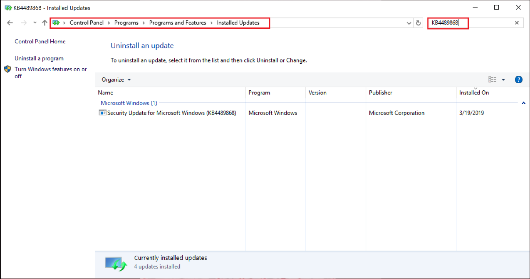 There will be a registry key to enable Gannen character for the initial year of the Japanese era and another set of registry keys supporting the existing four Japanese eras and the new Japanese era, after the new name is announced.

For instructions on how to mitigate this issue, see KB4520296.