Skip to main content
Dynamics 365 for Finance and Operations More...Less

The documentation about setting up and usage Dynamics 365 for Finance and Operations for MTD for VAT is published on https://docs.microsoft.com/en-us/dynamics365/unified-operations/financials/localizations/emea-gbr-mtd-vat-integration.

First part of fraud prevention parameters is supported in:

All the details related to the first part of fraud prevention parameters are explained in the KB # 4504462 and incorporated to the documentation on https://docs.microsoft.com/en-us/dynamics365/unified-operations/financials/localizations/emea-gbr-mtd-vat-integration as well.

As it was described in the KB # 4504462, it is supposed that most companies using Dynamics 365 for Finance and Operations in cloud architecture use “WEB_APP_VIA_SERVER” connection method interoperating with HMRC via Electronic messages functionality.

To support possibility of detecting parameters about originating device which must be transmitted as part of the API request to HMRC, an X++ methods were included into the application part. Here is the information about versions of Dynamics 365 for Finance and Operations including these methods: 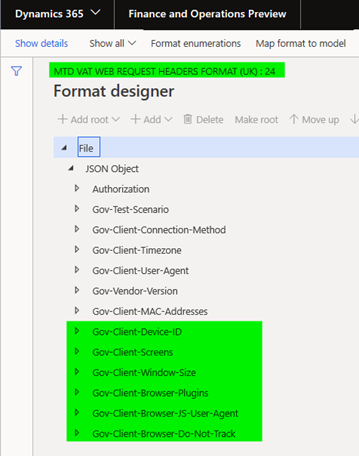 Determination of the corresponding values of the headers is supported via calling of the X++ methods by the “MTD VAT model mapping” configuration. “Electronic Messages framework model” was also extended to support included nodes used for mapping of the values of fraud prevention headers about originating device.

When mentioned or higher versions of the ER configurations are imported, fraud prevention parameters about originating device will be transmitted as part of the HTTP request the HMRC.

When user initiates a request to the HMRC without activating a batch job, the following page will inform about what information is going to be sent to the HMRC: 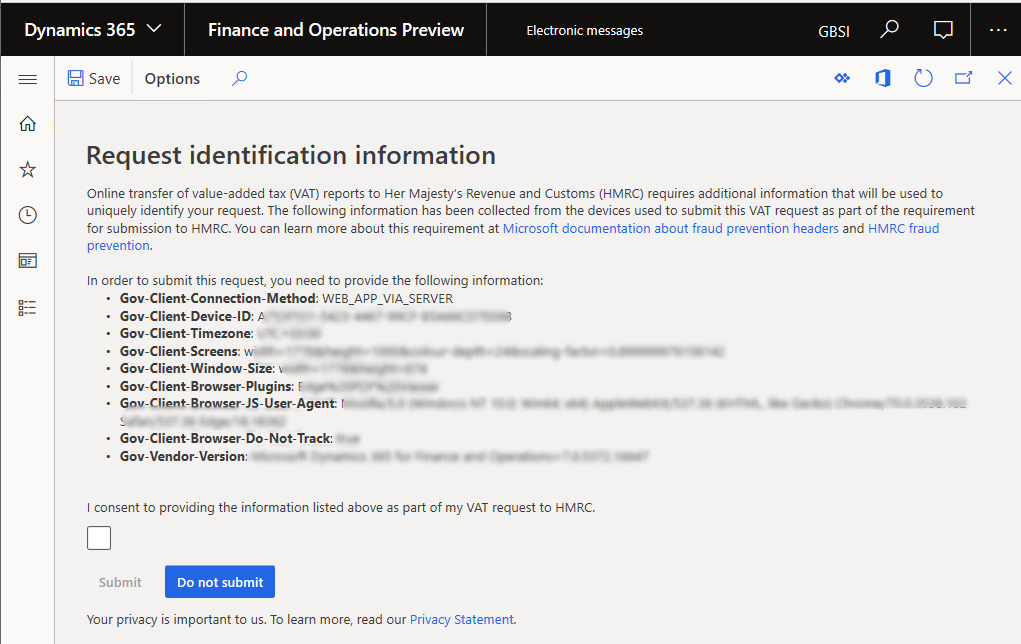 User must consent transmission of the information listed in the page by marking the check box, “Submit” will be activate and user will be able to click it to proceed further with request to HMRC.

Learn more how you can disable transmission of fraud prevention parameters for your system in the KB # 4504462.