You notice that Lightweight Directory Access Protocol (LDAP) or Kerberos responses from the domain controller are delayed by 2 to 5 seconds. When the issue occurs, the Lsass.exe process CPU usage is low (even lower than usual).

Around the same time (but up to a 4-hour offset), you may receive Netlogon warning event 5807. This event indicates that many client IP addresses couldn’t be mapped to configured subnet definitions in Active Directory:As noted in the event, you may also receive many entries that have NO_CLIENT_SITE: in the Netlogon log when it is configured.

This update adds the "Specify address lookup behavior for DC locator ping" Group Policy setting for Windows 7 and Windows Server 2008 R2. After the update is installed, the policy setting is available in the following location: 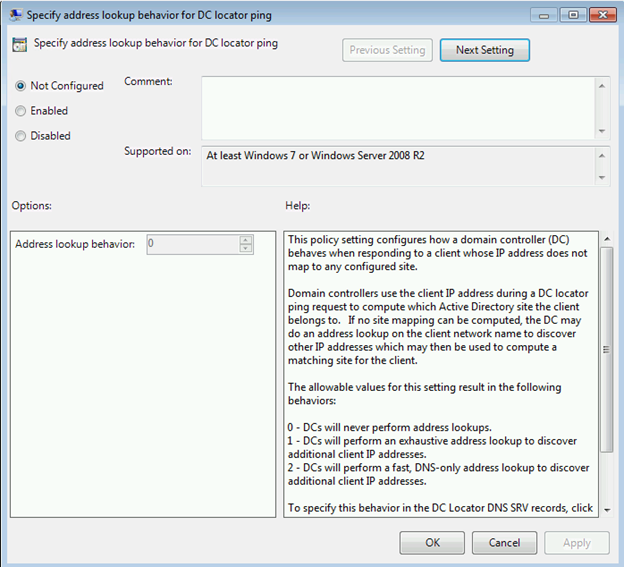 A supported hotfix is available from Microsoft. However, this hotfix is intended to correct only the problem that is described in this article. Apply this hotfix only to systems that are experiencing this specific problem.

If the hotfix is available for download, there is a "Hotfix Download Available" section at the top of this Knowledge Base article. If this section does not appear, submit a request to Microsoft Customer Service and Support to obtain the hotfix.

http://support.microsoft.com/contactus/?ws=supportNote The "Hotfix Download Available" form displays the languages for which the hotfix is available. If you do not see your language, it is because a hotfix is not available for that language.

Note This update is also applicable for Windows 7 to enable your to use Remote Server Administration Tools. The update should be installed on all domain controllers in all forests that response time is slow. Generally, they are the domain controllers in the forest root domains. You can also install the update on the computers that you use to manage group policies.

PrerequisitesTo apply this hotfix, you must have Service Pack 1 installed. For more information about how to obtain a Windows 7 or Windows Server 2008 R2 service pack, click the following article number to view the article in the Microsoft Knowledge Base:

Registry informationTo use the update in this package, you do not have to make any changes to the registry.

Restart requirementYou may be prompted to restart the computer after you apply this hotfix.

Microsoft has created an updated binary and policy settings to enable administrators to control how NetBT is used to process LDAP pings.

When a domain controller receives a LDAP User Datagram Protocol (UDP) ping, the domain controller performs a client IP address lookup to find a matching subnet definition in Active Directory in order to provide the client with the corresponding logon site name.

If the domain controller cannot find a matching subnet for the client IP, it performs its own name resolution with the client's NetBIOS name for potentially finding a different IP having a subnet match.

The name resolution is performed in accordance with the domain controller's available resolution mechanism. In addition to DNS, WINS and NetBIOS may also be used, including broadcasts. According to the name resolution response or time-out, the related LDAP ping is locking one of the threads of the limited Active Thread Queue (ATQ) pool. Many of these LDAP pings over a longer time may constantly exhaust the ATQ pool. Because the same pool is required for regular LDAP and Kerberos requests, the domain controller becomes almost unavailable to users.

Failing those three core operations would cause many transitive errors on remote clients, applications, and domain controllers.

You may also observe the following symptoms:


For more information about software update terminology, click the following article number to view the article in the Microsoft Knowledge Base:

Before this update is installed, the following workarounds were identified as avoiding the problem: