Microsoft is aware of new variants of the class of attack known as speculative execution side-channel vulnerabilities. The variants are named L1 Terminal Fault (L1TF) and Microarchitectural Data Sampling (MDS). An attacker who can successfully exploit L1TF or MDS may be able to read privileged data across trust boundaries.

UPDATED ON May 14, 2019: On May 14, 2019, Intel published information about a new subclass of speculative execution side-channel vulnerabilities known as Microarchitectural Data Sampling. They have been assigned the following CVEs:

Server workloads such as Windows Server Remote Desktop Services (RDS) and more dedicated roles such as Active Directory domain controllers are also at risk. Attackers who can run arbitrary code (regardless of its level of privilege) may be able to access operating system or workload secrets such as encryption keys, passwords, and other sensitive data.

To resolve these issues, Microsoft is working together with Intel to develop software mitigations and guidance. Software updates to help mitigate the vulnerabilities have been released. To obtain all available protections, updates may be required that could also include microcode from device OEMs.

This article describes how to mitigate the following vulnerabilities:

To learn more about the vulnerabilities see the following security advisories:

The following sections can help you identify systems that are affected by the L1TF and/or MDS vulnerabilities, and also help you to understand and mitigate the risks.

In testing, Microsoft has seen some performance impact from these mitigations, depending on the configuration of the system and which mitigations are required.

Some customers may have to disable hyper-threading (also known as simultaneous multithreading or SMT) to fully address the risk from L1TF and MDS. Be aware that disabling hyper-threading can cause performance degradation. This situation applies to customers who use the following:

Note: To determine whether your system is using VBS-protected security features, follow these steps:


The Hyper-V core scheduler mitigates the L1TF and MDS attack vectors against Hyper-V virtual machines while still allowing hyper-threading to remain enabled. The core scheduler is available starting with Windows Server 2016 and Windows 10 version 1607. This provides minimal performance impact to the virtual machines.

The core scheduler does not mitigate the L1TF or MDS attack vectors against VBS-protected security features. For more information, refer to Mitigation C and the following Virtualization Blog article:

For detailed information from Intel about the performance impact, go to the following Intel website:

The flow chart in figure 1 can help you identify affected systems and determine the correct set of actions.

As you navigate the flow chart, you will encounter lettered blue circles that map to an action or a series of actions that are required to mitigate L1TF attack vectors that are specific to your system configurations. Each action that you encounter must be applied. When you encounter a green line, it indicates a direct path to the end, and there are no additional mitigation steps.

A short-form explanation of each lettered mitigation is included in the legend on the right. Detailed explanations for each mitigation that include step-by-step installation and configuration instructions are provided in the "Mitigations" section. 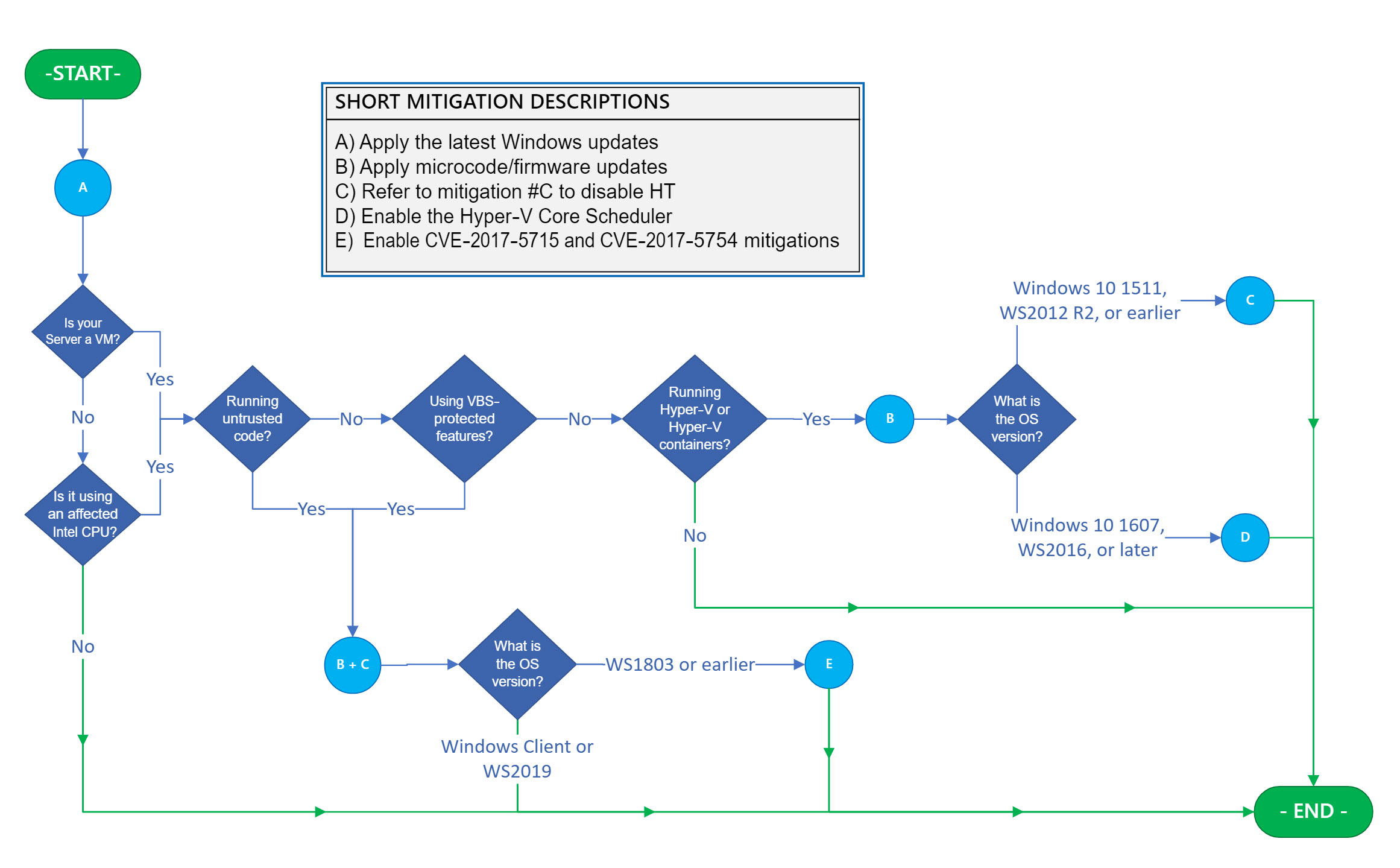 Important: The following section describes mitigations that should be applied ONLY under the specific conditions that are determined by the flow chart in Figure 1 in the previous section. Do NOT apply these mitigations unless the flowchart indicates that the specific mitigation is necessary.

In addition to software and microcode updates, manual configuration changes may also be required to enable certain protections. We further recommend that Enterprise customers register for the security notifications mailer in order to be alerted about content changes. (See Microsoft Technical Security Notifications.)

Obtain and apply the latest microcode or firmware updates

In addition to installing the latest Windows security updates, a processor microcode update is also required. Installation of these updates is provided by the device OEM.

Note: If you’re using nested virtualization (including running Hyper-V containers in a guest VM), you must expose the new microcode enlightenments to the guest VM. This might require upgrading the VM configuration to version 8. Version 8 includes the microcode enlightenments by default. For more information and the required steps, see the following article Microsoft Docs article:

Run Hyper-V in a Virtual Machine with Nested Virtualization

Should I disable hyper-threading (HT)?

The L1TF and MDS vulnerabilities introduce risk that the confidentiality of Hyper-V virtual machines and the secrets that are maintained by Microsoft Virtualization Based Security (VBS) could be compromised by using a side-channel attack. When Hyper-Threading (HT) is enabled, the security boundaries provided by both Hyper-V and VBS are weakened.

The Hyper-V core scheduler does not mitigate the L1TF or MDS attack vectors against VBS-protected security features. The L1TF and MDS vulnerabilities introduce risk that the confidentiality of VBS secrets could be compromised via a side-channel attack when Hyper-Threading (HT) is enabled, weakening the security boundary provided by VBS. Even with this increased risk, VBS still provides valuable security benefits and mitigates a range of attacks with HT enabled. Hence, we recommend that VBS continue to be used on HT-enabled systems. Customers who want to eliminate the potential risk of the L1TF and MDS vulnerabilities on the confidentiality of VBS should consider disabling HT to mitigate this additional risk.

Customers who want to eliminate the risk that the L1TF and MDS vulnerabilities pose, whether to the confidentiality of Hyper-V versions that are earlier than Windows Server 2016 or to VBS security capabilities, must weigh the decision and consider disabling HT to mitigate the risk. In general, this decision can be based upon the following guidelines:

The steps that are required to disable HT differ from OEM to OEM. However, they are typically part of the BIOS or firmware setup and configuration tools.

When possible, it’s recommended to disable HT in your BIOS or firmware for the strongest guarantee that HT is disabled.

Note: Disabling hyperthreading will reduce the CPU cores. This can have an effect on features which require minimum CPU cores to function. For Example, Windows Defender Application Guard (WDAG).

Using the core scheduler is a two-stage process that requires you to first enable the scheduler on the Hyper-V host and then configure each VM to take advantage of it by setting their hardware thread count per core to two (2).

The Hyper-V core scheduler that was introduced in Windows Server 2016 and Windows 10 version 1607 is a new alternative to the classic scheduler logic. The core scheduler offers decreased performance variability for workloads inside VMs that are running on an HT-enabled Hyper-V host.

For a detailed explanation of Hyper-V’s core scheduler and the steps to enable it, see the following Windows IT Pro Center article:

To enable the Hyper-V core scheduler on Windows Server 2016 or Windows 10, enter the following command:

Next, decide whether to configure a given VM’s hardware thread count per core to two (2). If you expose the fact that virtual processors are hyper-threaded to a guest virtual machine, you enable the scheduler in the VM operating system, and also the VM workloads, to use HT in their own work scheduling. To do this, enter the following PowerShell command, in which  <VMName> is the name of the virtual machine:

Note: These mitigations are enabled by default on Windows Server 2019 and Windows client operating systems.