Narrator reads aloud the text on your PC screen. It also describes events such as notifications and calendar appointments, which lets you use your PC without a display.

To start or stop Narrator, press Windows logo key + Ctrl + Enter. To see all Narrator commands, press Caps Lock + F1 after you open Narrator. If your device has a touchscreen, tap it three times with four fingers.

Note: For detailed info about how to use Narrator, including a complete list of Narrator keyboard commands, see Complete guide to Narrator.

Use Scan Mode to get going fast

Scan Mode can help you navigate apps and webpages more quickly. To turn Scan Mode on or off, press Caps lock + Spacebar. 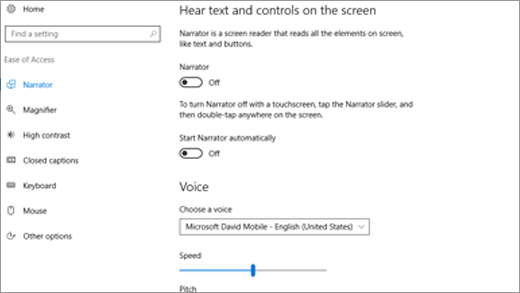