How the keys are organized

The keys on your keyboard can be divided into several groups based on function:

The following illustration shows how these keys are arranged on a typical keyboard. Your keyboard layout might be different. 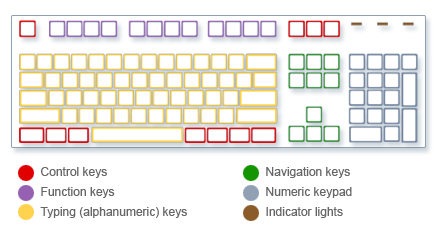 
Whenever you need to type something in a program, e‑mail message, or text box, you'll see a blinking vertical line (

) called the cursor or insertion point. It shows where the text that you type will begin. You can move the cursor by clicking in the desired location with the mouse, or by using the navigation keys (see the "Using navigation keys" section of this article).


In addition to letters, numerals, punctuation marks, and symbols, the typing keys also include Shift, Caps Lock, Tab, Enter, the Spacebar, and Backspace.

Keyboard shortcutsare ways to perform actions by using your keyboard. They're called shortcuts because they help you work faster. In fact, almost any action or command you can perform with a mouse can be performed faster using one or more keys on your keyboard.

You can do things in most programs by using the keyboard. To see which commands have keyboard shortcuts, open a menu. The shortcuts (if available) are shown next to the menu items. 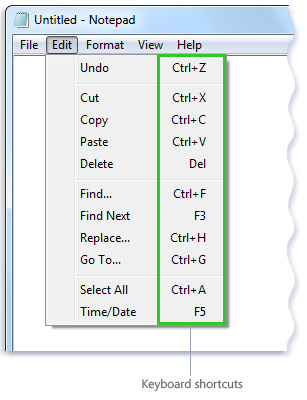 You can open menus and choose commands and other options using your keyboard. In a program that has menus with underlined letters, press Alt and an underlined letter to open the corresponding menu. Press the underlined letter in a menu item to choose that command. For programs that use the ribbon, such as Paint and WordPad, pressing Alt overlays (rather than underlines) a letter that can be pressed. 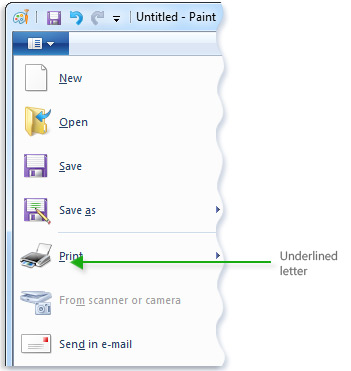 Press Alt + F to open the File menu, then press P to choose the Print command.


This trick works in dialog boxes too. Whenever you see an underlined letter attached to an option in a dialog box, it means you can press Alt plus that letter to choose that option.

The navigation keys allow you to move the cursor, move around in documents and webpages, and edit text. The following table lists some common functions of these keys.

The numeric keypad arranges the numerals 0 though 9, the arithmetic operators + (addition), - (subtraction), * (multiplication), and / (division), and the decimal point as they would appear on a calculator or adding machine. These characters are duplicated elsewhere on the keyboard, of course, but the keypad arrangement allows you to rapidly enter numerical data or mathematical operations with one hand. 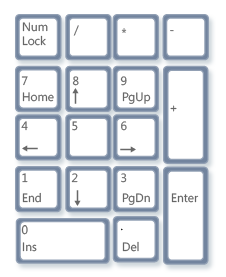 
You can use your numeric keypad to perform simple calculations with Calculator.

So far, we've discussed almost every key you're likely to use. But for the truly inquisitive, let's explore the three most mysterious keys on the keyboard: PrtScn, Scroll Lock, and Pause/Break.

A long time ago, this key actually did what it says—it sent the current screen of text to your printer. Nowadays, pressing PrtScn captures an image of your entire screen (a "screen shot") and copies it to the Clipboard in your computer's memory. From there you can paste it (Ctrl + V) into Microsoft Paint or another program and, if you want, print it from that program.

More obscure is SYS RQ, which shares the key with PrtScn on some keyboards. Historically, SYS RQ was designed to be a "system request," but this command is not enabled in Windows.

Tip: Press Alt + PrtScn to capture an image of just the active window, instead of the entire screen.

This key is rarely used. In some older programs, pressing this key pauses the program or, in combination with Ctrl, stops it from running.

Some modern keyboards come with "hot keys" or buttons that give you quick, one-press access to programs, files, or commands. Other models have volume controls, scroll wheels, zoom wheels, and other gadgets. For details about these features, check the information that came with your keyboard or computer, or go to the manufacturer's website.

Tips for using your keyboard safely

Using your keyboard properly can help avoid soreness or injury to your wrists, hands, and arms, particularly if you use your computer for long periods. Here are a few tips to help improve keyboard use: