Note This article only described and resoved the issue on a Microsoft keyboard which equipped with an F LOCK toggle key, issue with other types of keyborad may not applied to this article. 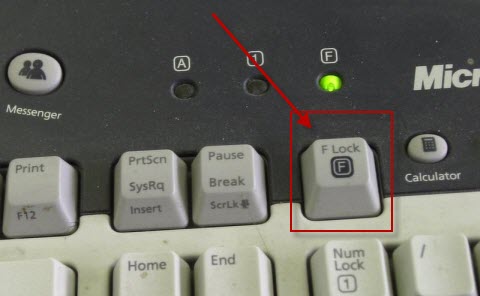 This behavior may occur if the keyboard is equipped with an F LOCK toggle key, and the F LOCK key has been turned on.

Depending on the keyboard model, the following keys may be alternate function keys:

To work around this behavior, press the F LOCK key. The F LOCK key switches between the standard function key commands and the Microsoft keyboard enhanced command.

The following table specifies the default enhanced-function key assignments that are available for Microsoft keyboards. However, you can reassign many of the keys by using the Microsoft IntelliType Pro keyboard software. Keyboards differ in what additional keys they provide. For example some keyboards provide keys for such things as Calculator, Volume control, Internet Home page, Internet Search page, Mail, and so on.


To download the latest software for the keyboard, visit the following Microsoft Web site: