How to charge Surface

Here’s some info about charging your Surface and what Microsoft-licensed power supplies are available for Surface.

To begin charging your Surface, connect the power supply that came with your Surface to a power source such as a wall outlet, power strip, or surge protector. 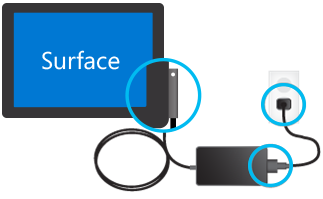 If the LED indicator  is not lit, you may have an issue with your power supply. For more info, see What to do if your Surface power supply or charger doesn't work.

Some third-party accessories may be incompatible with your device or are potentially counterfeit, so we strongly recommend that you purchase and use original Microsoft or Microsoft-licensed devices or accessories only. Use of incompatible or counterfeit accessories, batteries, and charging devices could result in damage to your device and pose a possible risk of fire, explosion, or battery failure leading to serious injuries, or other serious hazards. Damage caused by use with products, not manufactured, licensed, or supplied by Microsoft is not covered under the hardware warranty.

For Surface devices that have a USB-C port, you can choose to charge your device using that. If you choose to do so, keep these things in mind:

How much battery charge is left?

Your Surface alerts you when the battery is getting low. If you don’t recharge the battery when you get this alert, your Surface will eventually save your work and shut down.

How can you tell if your Surface is charging? 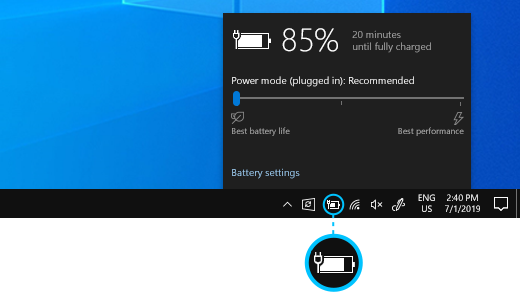 If the LED indicator  isn't lit or the battery icon doesn’t show that the battery is charging (you don’t see the electrical plug on the icon), See Surface Battery won’t charge or Surface won’t run on battery.

How can you tell if your Surface isn't charging? 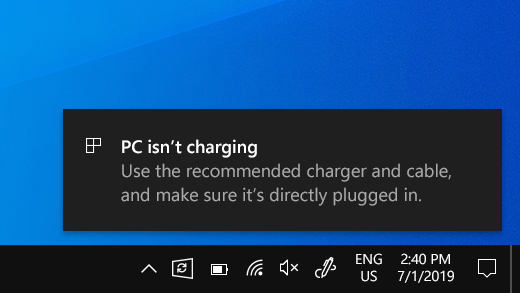 Check to make sure that the LED indicator  on the tip of the power supply's charging connector is lit. If it's not, you may have an issue with your power supply. For more info, see What to do if your Surface power supply or charger doesn't work.

How long does it take to charge a Surface?

The batteries in Surface Book may also charge at different rates, depending on the power state of each battery. Whichever battery has less than 20% charge will be charged first. After both batteries have been charged to 20%, both are charged at the same time. 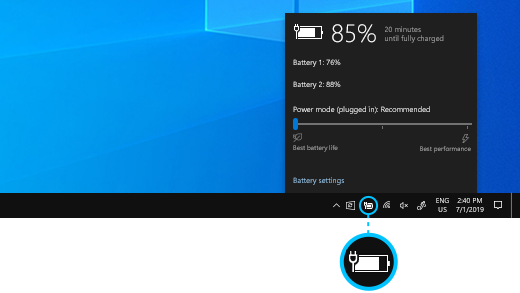 For info on how to properly care for the power cord and power supply, see Clean and care for your Surface.

The below table shows the voltage, amps, and watts used by the power supply units for different Surface models. Here are a few things to keep in mind:

What is Fast Charging?

What is touch current?

Touch current, or “tingle current,” may be detected by some device users when a minute, non-hazardous amount of residual electrical current passes through the user when touching a device. The sensation caused by touch current can range from a sensation of vibration, to a slight tingle or mild pinpricks.

Touch current does not occur when operating a device on battery power because the device’s power source (the battery) and its power system are contained completely inside the device.

Surface power supplies are designed to work with Surface. We strongly recommend only using a genuine Microsoft or Microsoft-licensed power supply, one that either came with your Surface or was purchased separately, to charge the battery.