Apps in Microsoft Teams meetings help you do things like:

Tip: Each app is different. Check the app’s support resources to learn what it can do in Teams meetings.

Who can use apps in meetings?

Meeting organizers and presenters can add, use, and manage apps (which includes removing apps and changing settings).

Attendees can use apps, though sometimes not every feature.

For more information, see roles in a Teams meeting.

Set up the app ahead of time to prepare for your meeting.

Add an app before a meeting

People can access the app you just added before, during, and after the meeting.

Use an app before a meeting

You might realize during a meeting that a specific app may add clarity to the discussion or better illustrate your point.

Add an app during a meeting

People can access the app you just added during and after the meeting.

Use an app during a meeting

While app features vary, there are some common ways to get started using apps in meetings.

to be able to open an app front and center for all meeting participants to use together. This is a great way to focus everyone's attention on the app's content (such as a dashboard). 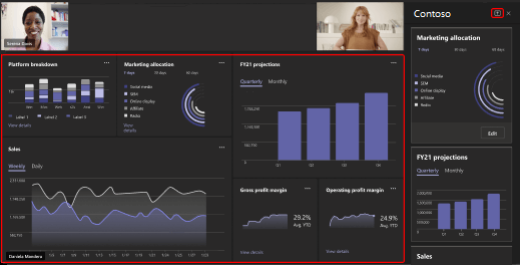 When you’re done using the app together, simply select Stop sharing at the top of your screen.

Keep in mind, you may also be prompted to use an app by someone else in the meeting (such as answer a poll question).

Available settings depend on the app associated with the meeting.

Remove an app from a meeting

Once a meeting ends, you can still go back and use its associated apps.

Use an app after a meeting

Note: Sixty days after a meeting was last joined, you can no longer access its apps or add new ones.