Skip to main content
Sign In
Sign in so we can serve you better.
Microsoft Teams
Meetings
Meetings
Broadcasting audio and video from Teams with NDI technology

Broadcasting audio and video from Teams with NDI technology

NDI® (Network Device Interface) technology allows you to broadcast the audio and video streams from a Teams meeting to your local network.

When using NewTek NDI® technology in a Teams meeting, you will have unique video steams on the network that can be used in your own production.

Turning on NDI® technology in Teams

First, NDI®-out needs to be turned on for each individual user by an admin. Once NDI®-out has been turned on, a new option will become available in Teams.

Next, go to your user profile picture in the upper-right of Teams and choose Settings. Then select Permissions and turn on the toggle next to Network Device Interface (NDI). 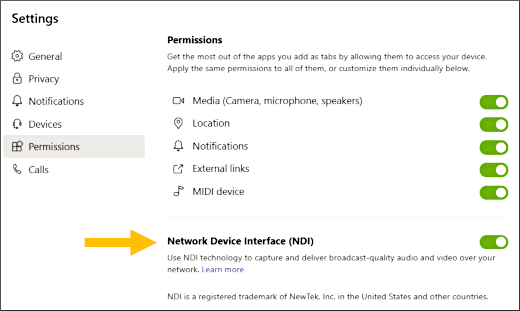 After enabling NDI® technology in Teams, you can go to your meeting controls and select More actions

and choose Broadcast over NDI.

Note: All meeting attendees who have subscribed to that NDI stream will be notified that broadcasting capabilities are turned on.

Once NDI® technology is turned on, the following streams will be available:

These are some common technical issues to consider when using NDI® Technology in Teams: 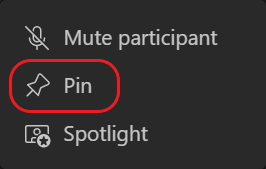